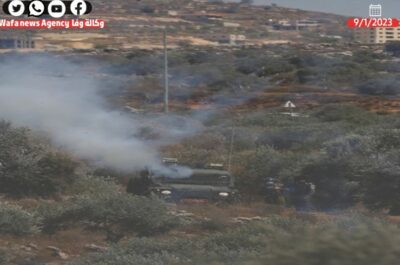 On Monday dawn, Israeli soldiers shot two young men after the army invaded the Aqaba town, north of Tubas, in the northeast part of the occupied West Bank.

WAFA added that the soldiers shot two Palestinians with live fire and caused several others to suffer the effects of tear gas inhalation.

Medical sources said the soldiers shot one Palestinian in the shoulder and the thigh, inflicting moderate wounds before he was rushed to a hospital in Tubas.

They added that the soldiers detained the second wounded Palestinian for a few hours before eventually allowing Red Crescent medics to move him to a hospital in Tubas.