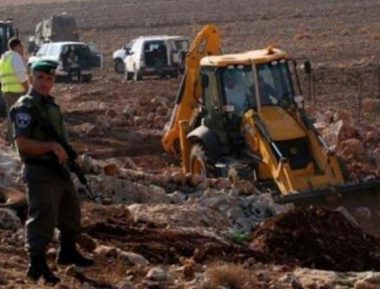 Israeli soldiers invaded, on Wednesday morning, Furush Beit Dajan village, east of the northern West Bank city of Nablus, and shut down water pipelines providing the community, and its local school, with the needed water.

Tawfiq Hajj Mohammad, the head of Furush Beit Dajan Local Council, said the pipelines are vital for the village, inhabited by around 12000 Palestinians, and for their agricultural lands, especially since most of the villagers depend in agriculture, and livestock, as the only sources in livelihood.

Dozens of locals, including schoolchildren, nonviolently marched while chanting against the escalating Israeli violations, and demanding their basic right to have running water in their community.

Several months ago, the soldiers closed water pipelines leading to the village, and alleged that the water supplies were not approved and licensed by Mekorot Israeli water company.

It is worth mentioning that Israel has been denying the Palestinians in the village from their right to build homes and structures on their lands.

Israel controls all natural resources in the occupied West Bank, including water springs and reservoirs, and provides its illegal colonies with uninterrupted water flow, while the Palestinians face frequent cut to their water service, and a lack of water resources due to Israel’s military occupation.

In related news, the soldiers confiscated, Tuesday, a mobile home owned by Ahmad Bisharat, on his land.

On Wednesday at dawn, the soldiers invaded Kufur Qaddoum town, east of the northern West Bank city of Qalqilia, stormed and searched homes, and fired many gas bombs at Palestinian protesters, causing many to suffer the effects of teargas inhalation.