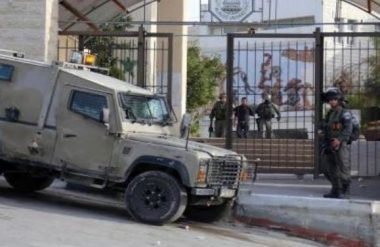 The soldiers surrounded and isolated Al-Quds University, and the nearby Schools Street, before preventing dozens of students from reaching their education facilities.

Many Palestinians protested the invasion, and hurled stones at the army jeeps, while the soldiers fired concussion grenades, gas bombs and several rounds of live ammunition.

Medical sources said many Palestinians suffered the effects of teargas inhalation, and received the needed treatment by local medics.

On Wednesday at dawn, the soldiers invaded Kufur Qaddoum town, east of the northern West Bank city of Qalqilia, stormed and searched homes, and fired many gas bombs at Palestinian protesters, causing many to suffer the effects of teargas inhalation.