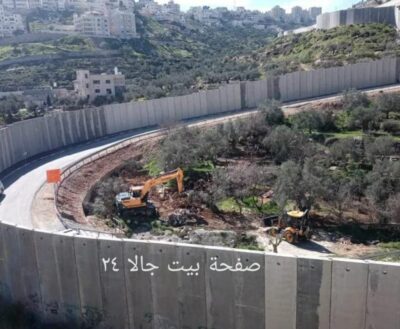 Israeli soldiers, accompanied by bulldozers, invaded Palestinian lands near the illegal Annexation Wall in Beit Jala city, near Bethlehem south of occupied Jerusalem in the West Bank, and bulldozed them.

The soldiers invaded the lands in the morning hours, Tuesday, and started uprooting and bulldozing them, the family said.

They are owned by Naim Abu Sa’d and his family, and are located in Be’er Owna area, in Beit Jala.

The lands are largely planted with olive trees and are surrounded by the illegal Annexation Wall.

Resident Rami Abu Sa’d said the soldiers invaded his family’s lands and started bulldozing them without prior notice or any cause.

The attack is part of Israel’s ongoing violations against the Palestinians and their lands, especially amidst the serious escalation of the construction and expansion of the colonies, in direct violation of International Law and the Fourth Geneva Convention.