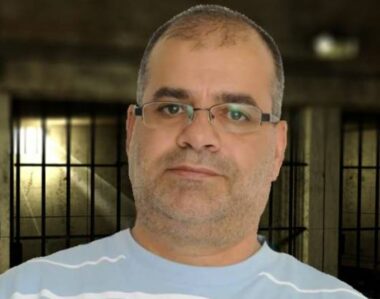 The Palestinian Prisoners’ Society (PPS) has reported that a detainee from occupied Jerusalem is facing serious health complications from the coronavirus and is currently at Assaf Harofeh Israeli Medical Center.

The PPS stated that the detainee, Ayman Seder, 54, who was taken prisoner 26 years ago, was only recently moved to the medical center despite the serious deterioration in his health and various complications.

It added that Seder was initially placed in the infamous Ramla prison clinic, which lacks specialists and basic equipment, until his health sharply deteriorated, due to complications resulting from the coronavirus infection.

The PPS stated that it is difficult to obtain exact information about his conditions, as well as other detainees, due to Israeli restrictions and the refusal to allow physicians from human rights groups to visit with the detainees and examine them.

It said that Israel dominates the entire narrative regarding the conditions of the detainees, especially those in serious health conditions, and can do so due to the idleness of the International Community.

The PPS held Israel fully responsible for the life of the detainee, and all political prisoners, especially the elderly and those who have serious conditions, such as cancer, heart, and liver diseases, and called on legal and human rights groups, including the International Red Cross to perform their duties.

It is worth mentioning that the Seder, a married father of one son, is serving a life term in prison, and is one of the dozens of detainees who recently became infected with the coronavirus since January 11, 2021.