Army Abducts Three Palestinians In Hebron, One In Ramallah 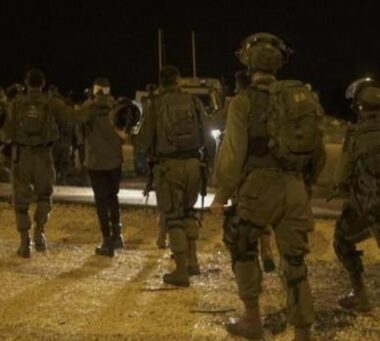 Israeli soldiers abducted, on Tuesday at dawn, three young Palestinians from their homes in Hebron governorate, in southern West Bank, and one near Ramallah, in the central part of the occupied territory.

The Hebron office of the Palestinian Prisoners’ Society (PPS) has reported that several army jeeps invaded Doura town, south of the city, before the soldiers stormed and ransacked homes, and abducted Mohmmad Issa Rajoub.

In addition, the soldiers abducted Ahed Samer Abu Sharkh, 23, from his home in the ath-Thaheriyya town, south of Hebron.

It is worth mentioning that the soldiers also installed a military roadblock at the main entrance of the al-Fawwar refugee camp, south of Hebron, before stopping and searching Palestinian cards, and interrogated dozens of residents while inspecting their ID cards.

In Ramallah, in central West Bank, the soldiers invaded Kobar town, northwest of the city, searched a few homes, and abducted a young man, identified as Sari Barghouthi.

It is worth mentioning that the soldiers also invaded Tammoun town, south of Tubas in northeastern West Bank, before storming and ransacking the home of a former political prisoner, identified as Riyad Hazza’ Bani Odah.

In related news, the soldiers invaded the Deheishe refugee camp, south of the West Bank city of Bethlehem, and shot a teen, in addition to abducting two Palestinians in the al-Khader nearby town.

On Monday evening, the soldiers shot a young Palestinian man near the Annexation Wall, close to the town of Barta’a, southwest of Jenin.