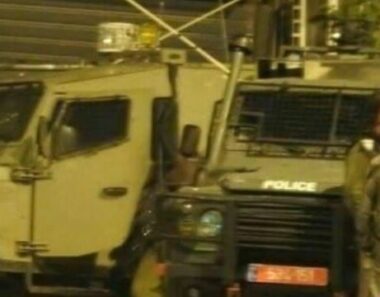 Israeli soldiers invaded, on Tuesday at dawn, the Deheishe refugee camp, south of the West Bank city of Bethlehem, and shot a teen, in addition to abducting two Palestinians in the al-Khader nearby town.

They added that the soldiers shot a Palestinian teen, 17 years of age, with a live round in the leg, before he was rushed to the Arab Society Hospital. Many Palestinians suffered the effects of teargas inhalation.

In addition, the soldiers invaded the al-Baloa’ area, in the al-Khader town, south of Bethlehem, searched many homes, before abducting Mustafa Ibrahim Da’amsa, 21, and Islam Mohammad Sabateen, 19.

On Monday evening, undercover soldiers kidnapped Omar Ali Abu Obeid, 20, from a restaurant he works at, in Umm al-Fahm town. The Palestinian is from Jenin city, in northern West Bank.