WAFA: “Palestinian injured as settlers push him off wall south of Nablus” 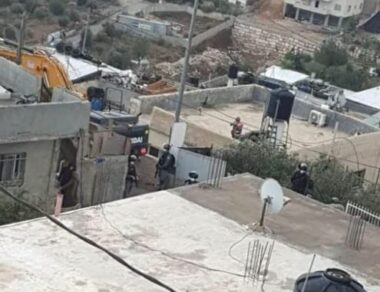 NABLUS, February 8, 2021 (WAFA) – Israeli settlers today afternoon pushed a Palestinian off a wall in al-Lubban ash-Sharqiya village, south of Nablus city, according to a local official.

Head of al-Lubban ash-Sharqiya Village Council confirmed that settlers pushed Mohammad Daraghmeh, 50, off a 4-meter-high wall as they forced their way into the village, under the protection of the Israeli military.

Daraghmeh, whose condition was not identified, was rushed to a hospital for urgent treatment.

Several other villagers sustained bruises as they confronted the settlers and attempted to fend them off.

Meanwhile, violent confrontations erupted as a group of Israeli settlers stormed the area of Bab al-Taqa in Kafr Ni‘ma village, west of Ramallah.

Witnesses confirmed that Israeli soldiers, who provided protection to the settlers, opened fire towards the local youths and attempted to detain one. No injuries were reported though.

Settlers‘ violence includes property and mosque arsons, stone-throwing, uprooting of crops and olive trees, attacks on vulnerable homes, among others.