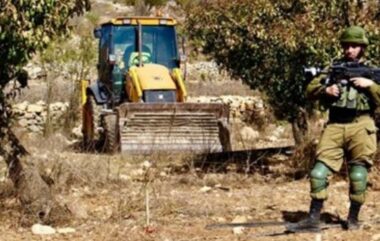 Local sources said the soldiers began the uprooting of the lands, owned by several Palestinians from Jinsafut, three days ago,

They added that the lands are approximate 100 Dunams, near the illegal Emanuel colony, which was constructed on stolen Palestinian lands.

Israel is currently trying to expand the colony and build infrastructure by annexing more Palestinian lands.

Israel’s colonies in the West Bank, including those in and around the occupied capital, Jerusalem, are illegal under International Law, the Fourth Geneva Convention in addition to various United Nations and Security Council resolutions.