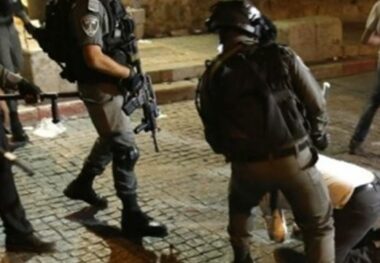 Israeli soldiers abducted, Thursday, seven Palestinians, including children, in addition to attacking a family in their home, in several parts of the occupied West Bank.

They added that the soldiers assaulted a man, his wife, and their two daughters while searching their home and ransacking it, in the town.

The soldiers also abducted Omar Abdul-Aziz Alqam and Mahmoud Mohammad Awad, from their homes in the town, in addition to Amid Jabarin, from his home in Hebron city.

The soldiers also invaded the al-Jalazoun refugee camp, north of the central West Bank city of Ramallah, and abducted Hadi Mahmoud Ghawanma from his home.

In the Qalandia refugee camp, north of occupied Jerusalem, the soldiers abducted Ghassan Shawamra, from the al-Kassarat neighborhood, in addition to Walid Salem Khatib, from his home in Hizma town, northeast of the city.

Furthermore, the soldiers invaded homes in the at-Tour town, in Jerusalem, and abducted Ahmad Abu Sbeitan, 16, in the al-Khalla area, in addition to detaining Abdullah al-Mokhtar, 17, for several hours before releasing him.

Protests erupted in the town, especially in the al-Khalla area before the soldiers fired many gas bombs and concussion grenades.