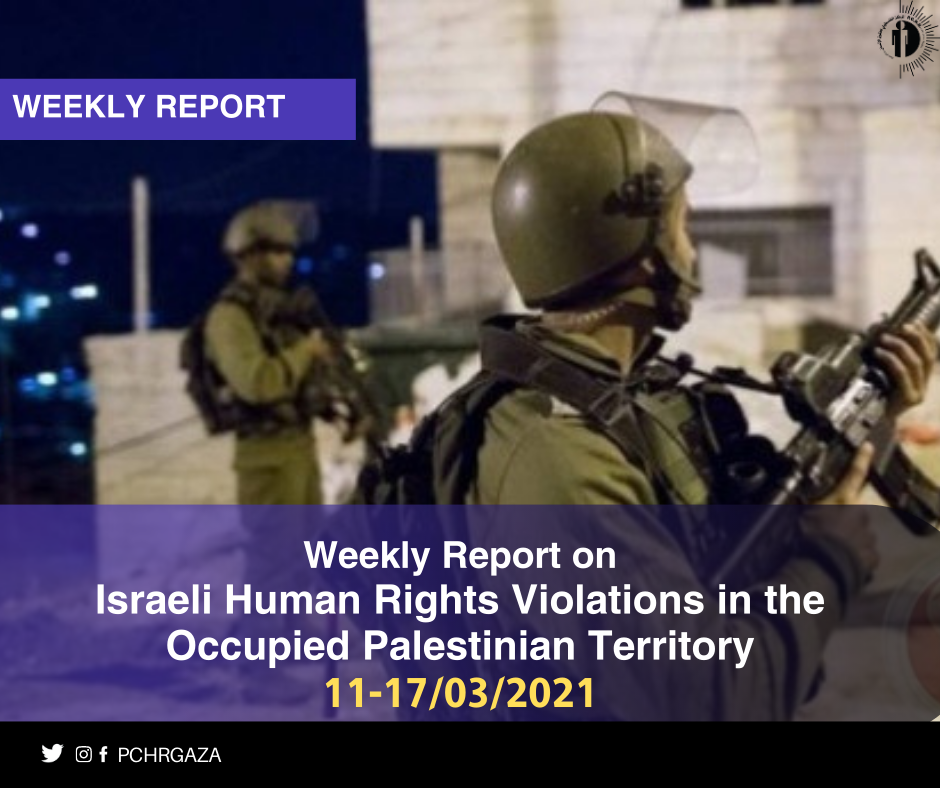 Israeli occupation forces (IOF) continued to commit crimes and multi-layered violations against Palestinian civilians and their properties, including raids into Palestinian cities that are characterized by the excessive use of force, assault, abuse and attacks on civilians that are mostly conducted after midnight and in the early morning hours. Furthermore, IOF continued its demolition operations and delivery of cease-construction and demolition notices in the West Bank, which includes occupied East Jerusalem. The Palestinian Centre for Human Rights (PCHR) documented 228 violations of international human rights law and international humanitarian law (IHL) by IOF and settlers in the occupied Palestinian territory (oPt).

IOF shot and injured 23 civilians (including 3 children and a minister) in its excessive use of force against civilians in the West Bank: 11 were wounded in clashed during IOF demolition of buildings in Kafr ‘Aqab, occupied east Jerusalem; 3 during IOF incursion into Dheisheh refugee camp, Bethlehem; 5, including Minister of Labor Nasri Abu-Jash, 54, who sustained two bullets in the abdomen and back in IOF suppression of a peaceful protest in Nablus; another civilian was wounded in Nablus. 2 children in al-Jalazoun refugee camp, Ramallah; and another civilian was shot near the annexation wall in Qalqilia. Dozens of others suffocated due to tear gas inhalation. Also, one civilian was wounded after an explosive device left by IOF detonated in central Jordan valleys.

In the Gaza Strip, 5 IOF shootings were reported on agricultural lands eastern Gaza; and 3 at fishing boats in the Gaza sea.

IOF carried out 138 incursions into the West Bank, including occupied East Jerusalem. Those incursions included raids of civilian houses and shootings, enticing fear among civilians, and attacking many of them. During this week’s incursions, 71 Palestinians were arrested, including 12 children and 2 sisters.

In the Gaza Strip, IOF conducted one limited incursion into eastern Central Gaza and arrested a child who was allegedly trying to cross the border between Gaza and Israel.

The wounded civilians were as follows:

2. Minister of Labor Nasri Khalil Saleem Abu Jash (54) was shot with 2 rubber-coated steel bullets in his abdomen and back.

4. 60-year-old elderly was shot with 2 rubber bullets in his feet.

All of the wounded civilians were taken to Rafidia hospital for treatment. Also, many protestors suffocated due to teargas inhalation and received treatment on the spot.

The paramedic Bashar Mu’amer Qaryuti said to PCHR’s fieldworker that:

“At approximately 20:30 on Sunday, 14 March 2021, while I was at my duty in the Palestinian Red crescent office in the center of Qaryut village, southeast of Nablus, along with my colleagues ‘Abed al-Raheem Mahmoud Falah Hamdan and Mo’tasem Mefleh Ahmed Badawi, we knew that IOF moved into the village and they fired teargas canisters at residential houses. We immediately got into the PRCS vehicle and headed to Kasab family’s house, where we provided aid for 6 persons. After that, we headed to ‘Awad Rateb’s house and found 4 soldiers stood in front of the house. We managed to enter the house and provide help of its inhabitants. When we got out of the house, we found the vehicle’s rear window was broken. We asked neighbors and they told us that IOF broke the window and flee towards ‘Ali settlement. We phoned the Palestinian Liaison office and told them about what happened.”

1. Nayef Salama Abu Kharabish, his 60-square meters barracks which is used as a shelter for 8 civilians; including 6 children and a woman, was demolished and confiscated.

2. Fadi Salama Abu Kharabish, his two barracks (60 square meters for each), which are used for sheltering 3 civilians including a woman and a child, and the other one is used for grazing sheep, were demolished and confiscated.

3. Ali Salama Abu Kharabish, his 60-square meters barracks which is used as a shelter for 8 civilians; including 6 children and a woman, was demolished and confiscated.

“At approximately 8:00, I went with my husband Sa’id ‘Awad (48) and my six children; the eldest is Sanad (15), along with other children of my in-laws, to picnic in our land in Sho’ab Al-Butm, where my husband, his brothers and his uncle own around 288 dunams overlooking “Mitzpe Yair” settlement from the northern side. The Israeli Supreme Court issued a decision that we own the land except for a small part, which is not settled yet. When we arrived at the land, there was a settler namely, Yusi, whom we know grazing his sheep amid the olive seedlings and winter crops. We went to tell the Israeli police, who asked us to take a video to prove that the settler is present in the land, so I started taking the video of the settler with his sheep, while my husband called the Israeli police and the popular committees in al-Masafer area in order to come to the land. A few minutes later, the settler made phone calls, and we saw a number of young settlers coming towards us from behind a caravan close to the settlement’s borders; a number of them were masked and carrying sticks. They approached us, and one of them hit me on my back with an iron bar in his hand and I fell on the ground. He tried to take my cell phone with which I was taking the video to capture what was going on. My son, Sanad, tried to defend me and take away the settler who had attacked my husband and hit him on the head with an iron bar on his head and body. My husband fell unconscious on the ground and the settler broke his cell phone. The rest of the settlers threw stones at us and our car; as a result, they broke the windshield and side windows. I started screaming at the settlers, who ran away. Few minutes later, three soldiers arrived, followed by Magen David Adom ambulances, which gave us first aid, while residents of the area arrived. We asked the soldiers to take my husband to an Israeli hospital, but they refused, claiming that the attack was by settlers and not by IOF. Around an hour later, the Israeli police arrived. The ambulances drove us to a place close to the “Susiya” settlement, where a Palestinian ambulance took us to the Hebron Governmental Hospital for treatment. At approximately 22:00, doctors there decided to refer my husband to Al-Ahli Hospital, where he underwent a surgery for his jaw. My husband is still receiving treatment due to bruises in his face and the rest of his body, in addition to a fracture in his left jaw.”

Posted by Palestinian Centre for Human Rights on Thursday, March 18, 2021