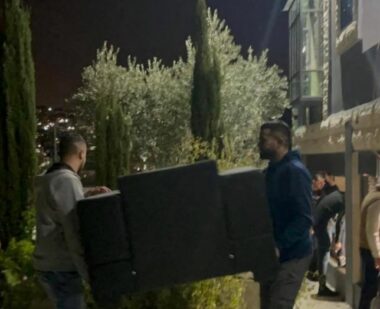 On Thursday, two Palestinian siblings from Jabal al-Mokabber village, in occupied Jerusalem, had to evacuate their homes and remove their furniture and belongings, after the City Council denied appeals against the destruction of their property.

The Wadi Hilweh Information Center in Silwan (Silwanic) said the homes are owned by Khaled al-Abbassi, and his brother Monir.

It added that the siblings were recently informed of the final decision to demolition their homes, and were ordered to carry the demolition out by March 11th.

The two tried to file appeals to at least delay the demolitions, but their applications were denied.

The homes were built in the year 2016, before the City Council ordered their demolition, while the family continued to appeal, and tried to obtain all needed permits in addition to paying fines, including 70.000 Shekels, which were paid in the year 2019.

In related news, the soldiers demolished sections of a commercial structure and its front yard in the al-Matar Street, north of Jerusalem.

The structure was partially demolished by its owner earlier this month, after the City Council denied all permit applications.

On Wednesday, a Palestinian from Silwan town in Jerusalem, identified as Fayez Abdul-Latif, was forced to demolish his home, which was built three months ago.

The Palestinian built the home on his land, and was in the final stages prior to inhabiting it.