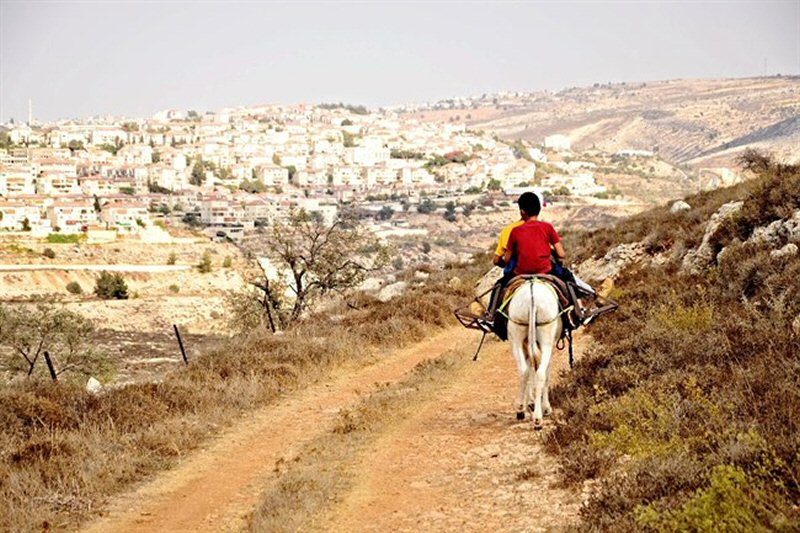 A Palestinian rides on a donkey with a settlement in the background (Photo: Christian Peacemaker Team)

The Israeli government is defending the legality of the outpost “Regularization law” at the Israeli Supreme Court, and says that the expropriation of Palestinian-owned land would benefit Palestinians because they would receive financial compensation for it, reportedly describing Palestinian laws prohibiting the sale of land to Israelis as “racist.”

The hearing came in response to two petitions filed by human rights groups to the court demanding to strike down the law, which would pave the way for the retroactive legalization of dozens of illegal Israeli settler outposts.

The Regularization law, passed by the Israeli parliament in February, states that any settlements built in the occupied West Bank “in good faith” — without knowledge that the land upon which it was built was privately owned by Palestinians — could be officially recognized by Israel pending minimal proof of governmental support in its establishment and some form of compensation to the Palestinian landowners.

Israeli NGO Peace Now said, in a statement on Monday, that in response to the petitions — one of which was submitted by Peace Now and fellow rights groups Yesh Din and ACRI — the government justified the law by saying that the Palestinian landowners would receive monetary compensation.

“The government even went as far as to claim that the Palestinian landowners whose land was stolen by Israeli citizens actually benefit from the law, since they actually want to sell their lands, but can’t do so due to Palestinian laws,” Peace Now said, adding that the response also claimed that the illegal settlements in the West Bank “are a national interest that justifies confiscation of private lands.”

Israel also claimed, according to Ma’an, that Palestinian laws that prohibit selling land to Israelis were “racist,” ACRI said in a statement.

According to ACRI, the Israeli state’s response argued that the parliament, or Knesset, can impose law in the occupied territory to address “problems faced by Israelis” and that settlers were considered a “local population.”

The rights groups had argued in the petition that the law was not just a contravention of international law but unconstitutional for Israel, as it “clearly violates the basic law: human dignity and liberty, while forcing authorities to expropriate rights of land ownership and usage from Palestinians for an unlimited time period.”

“The government attempts to present Israeli citizens, who are directly involved in land theft of Palestinians, as deserving a reward for their participation in the thievery,” Peace Now said.

“Additionally, the law violates international humanitarian law, the laws of occupation and other international conventions signed by Israel, which oblige the state of Israel to protect the rights of residents of the occupied territory and forbid the expropriation of their property for any use by an immediate security need,” the petitioners said.

“Up until today, Israeli laws in the West Bank applied only to Israeli citizens on a personal basis. Passing the law is a clear act of applying sovereignty and thereby it is an act of illegal annexation.”

ACRI wrote that the Israeli state’s response “completely ignores the extent of the continuous unlawful violations of rights of Palestinian landowners caused by illegal takeovers of their land for settlement purposes. It expresses Israeli policies to retroactively legalize illegal Israeli construction in the West Bank in contravention to Israeli law as well as International Humanitarian Law, while rewarding the perpetrators who had illegally taken over land not belonging to them.”

The estimated 196 government recognized Israeli settlements scattered across the Palestinian territory are all considered illegal under international law.

While members of the international community have rested the solution to the Israeli-Palestinian conflict on the discontinuation of illegal Israeli settlements and the establishment of a two-state solution, Israeli leaders have instead shifted further to the right, with more than 50 percent of the ministers in the current Israeli government publicly stating their opposition to a Palestinian state.