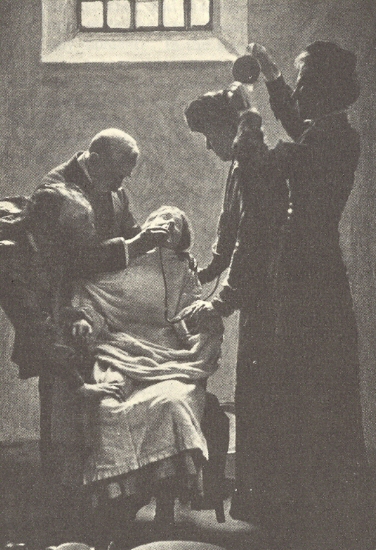 (photo: A suffragette is force-fed in HM Prison Holloway, in the UK, during hunger strikes for women’s suffrage. ~Wikipedia)

The ruling comes after three Palestinian prisoners who were detained without charge, by Israel, have continued their strikes for over 60 days, despite each of their medical conditions having seriously deteriorated.

Following the passage of the law in July of 2015, the IMA had said that, if it was upheld, Israeli doctors would be instructed to ignore it, according to Israeli daily newspaper Haaretz.

“This is a case in which medical ethics unequivocally trump the law, and the message we wish to convey to physicians is that forced feeding is tantamount to torture and that no doctor should take part in it,” Haaretz quoted IMA chairman Dr. Leonid Eidelman as saying.

However, according to Ma’an News Agency, justices reportedly decided on Sunday that the “complex” issue of hunger strikers transcended ordinary patients’ rights.

A hunger striker “is not an ordinary patient but a person who knowingly and willingly places himself in a dangerous situation as a protest or a means of attaining a personal or public goal,” the justices reportedly wrote, adding that a hunger strike and its outcome have “implications that go beyond the personal matter of the hunger striker.”

According to the International Committee of the Red Cross (ICRC), an organization operating in Israel and the occupied Palestinian territory that provides a number services to Palestinian prisoners and their families, “Forced feeding of hunger strikers is never ethically acceptable. It is furthermore a violation of internationally accepted medical ethics and may lead to violations of international humanitarian law.”

A spokesperson for the ICRC could not immediately be reached for comment regarding how Sunday’s ruling will affect their work in Israeli prisons.