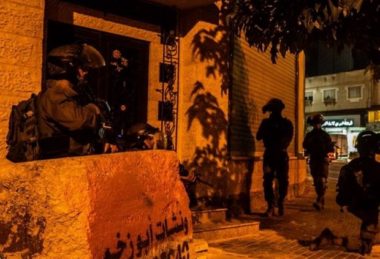 In the town of Beit Awwa in Hebron, in the southern West Bank, Israeli forces abducted Mohammad Osama Shalash and Uday Ismail Shalash.

Both are believed to be under age 18, although their exact ages have not been reported.

Meanwhile in Bethlehem, also in the southern West Bank, Israeli troops abducted Amer Ali Dhuib and Hafez Dauw , while another teenager,  Osama Ali al-Badan (16), received a notification to report to a nearby interrogation center for questioning.

Izz al-Din Freihat, from al-Yamoun village, was abducted in front of Tayyar checkpoint. He is also a former prisoner.