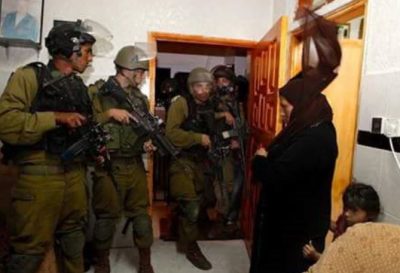 The sources added that soldiers invaded and vandalized the home of Mohammad Saif, and abducted him.

Israeli troops also invaded Burin village, south of Nablus, and broke into the home of ex-prisoner, Ghassan Alnajjar, before abducting him, and took him to an unknown destination.

In the southern West Bank city of Hebron, Israeli troops abducted one Palestinian.

Local media reports said that the Israeli army, stationed at a mobile roadblock, intercepted Palestinian resident, Ahmad Abu Aisha, before they abducted him and took him to an unknown destination.

Witnesses said that Abu Aisha was driving his own vehicle, before the soldiers stopped him near the illegal Israeli Etzion settlement.

Meanwhile, local sources in Hebron said that a large Israeli force invaded the Sahla neighborhood, broke into and vandalized several homes, including the home of Rafeeq al-Qudsi.

They added that the soldiers took photographs of al-Qudsi’s home, before they withdrew from the neighborhood.

Noteworthy, over the past several weeks, Israeli troops have increased their abduction operations, across the West Bank, as Israeli government officials have announced Israel’s intention to annex large swathes of the Jordan Valley of the occupied West Bank, by early July.