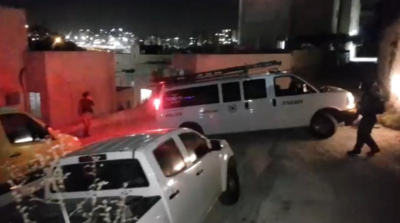 According to local sources, on Monday evening, the Israeli forces stormed the village, deployed troops throughout the streets and began firing tear gas into the streets and residences.

The also grabbed 3 boys from Mheisen neighborhood in al-Isawiya town and put them into their armored military vehicles to take to an interrogation center.

Mohammed Abu al-Hummos, a member of the local organizing committee in al-Isawiya , told the Silwan Information Center that the Israeli forces took three boys: Omar Mahmoud, Ismail Mheisen, and Wasim Dari from the village, during the storming and deployment in the streets.

The Popular Committee of al-Isawiya called for a protest tomorrow against the campaign of abuse and attacks on the people of the village.

The abductions on Monday follow a series of assaults and abductions in recent days which culminated in a school strike being declared in the village on Saturday.

The Parents’ Committee of al-Isawiya confirmed that the school strike, which began on Saturday, will continue until a safe environment for the students and young children of al-Isawiya can be ensured.

The school strike began after the Israeli police invaded a school in al-Isawiya Saturday, assaulted the principal, and abducted schoolboy Saleh al-Tawil from inside his school.

The Israeli invasions of al-Isawiya have come to be an almost-daily occurrence, which almost always occur at the time when students are returning from school. This ends up with confrontations between stone-throwing teens and invading soldiers, because of the provocative measures taken by the Israeli military.

A video leaked in October showed Israeli police in al-Isawiya discussing how their daily invasions were a provocation to the residents.

According to the Middle East Monitor, in the video, Israeli officers are heard discussing the purpose of the operations in al-Isawiya , with one remarking: “This is really provoking them for nothing.” A second officer agrees. The first officer subsequently asks: “Why do this on purpose?” The second one replies: “Our policy is screwed up from the outset.”

The first officer then comments: “Let them live. You’re provoking them here for nothing.”

The video was shown during a hearing at Jerusalem Magistrate’s Court, where Issawiya resident Abdallah Mustafa was charged with throwing three stones at police on the day the video was filmed.

The prosecutor claimed that the police officers had “a slip of the tongue”, and the judge sentenced Mustafa to seven and a half months in prison.