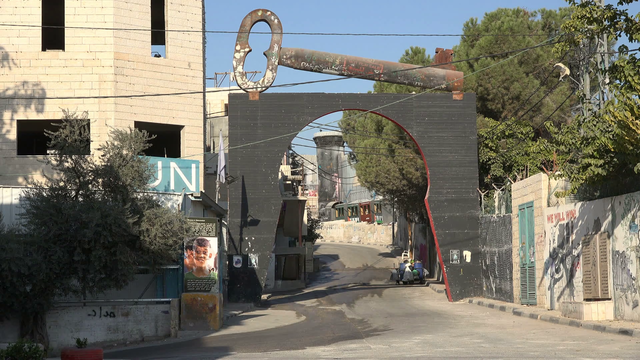 Israeli soldiers invaded the Aida Refugee Camp, near Bethlehem, on Friday and shot a 14-year-old child with live ammunition.

The invasion came in the midst of a flurry of protests on Friday across the West Bank, a day after the deaths of five Palestinians, including a child, at the hands of Israeli forces.

The Aida refugee camp is known throughout the Palestinian Territories for its key-shaped entrance archway – symbolizing the 750,000 Palestinians who were displaced during the creation of the state of Israel in 1948. Many of these Palestinians took the keys of their homes with them as they fled, thinking they would be returning home within weeks. Now, three generations later, the keys to those homes that were taken over by Israelis have become a symbol of Palestinian steadfastness and determination to return home.

When the Israeli army invaded the camp on Friday evening, they were met with protests from local youth, who shouted slogans and threw stones at the invading Israeli army.  The clashes took place mainly under and around the key archway, known in Arabic as ‘Muftah’ (meaning key).

In addition to wounding the child with live ammunition in the thigh, the Israeli soldiers also fired tear gas and sound bombs at the crowd of gathered youth, causing many to suffer from tear gas inhalation.