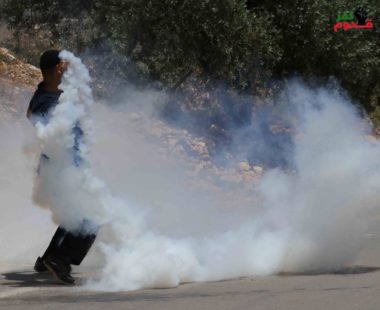 Three Palestinian children were reportedly injured, on Friday, due to tear gas inhalation, after Israeli troops fired tear-gas canisters against protestors at the weekly protest of Kufur Qaddoum village, east of the northern West Bank city of Qalqilia.

The protest, staged on Fridays, in protest of Israel’s Apartheid Wall, settlements and the closure of the main road for the past 16 years, has consistently elicited a violent Israeli response.

He added that one of the tear gas canisters hit the home of Diya Eshteiwi, causing inhalation injuries of Diya, his wife and his three children, all under the age of 6.

This weeks protest comes at a time when Israeli leaders have revealed the possibility of annexing and wresting control over the entire Palestinian West Bank, which Israel occupied, back in June 1967.

Participants of this Friday’s protest called for Palestinians to increase resistance actions against the Israeli military occupation and its impending illegal take-over more occupied lands.