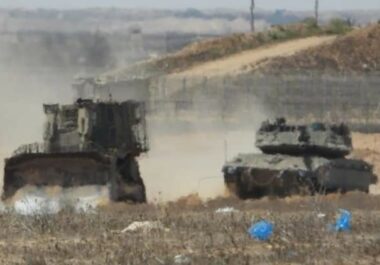 Media sources said at least three tanks and three armored bulldozers invaded the Palestinian lands near the perimeter fence east of the al-Maghazi and the al-Boreij refugee camps, in central Gaza.

They added that the soldiers bulldozed sections near the fence and installed sand hills, in addition to firing live rounds and smoke bombs.

It is worth mentioning that the army frequently attacks farmers, shepherds, workers, and fishermen along the easter parts of the coastal region and in Palestinian territorial waters, leading to dozens of casualties, including fatalities, in addition to preventing the Palestinians from tending to their lands and from fishing to provide for their families.