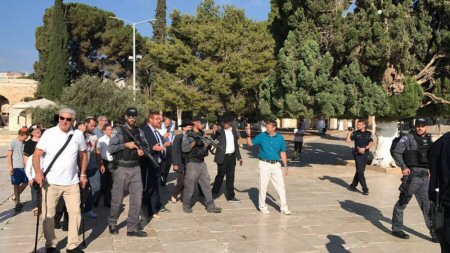 Groups associated with the reconstruction of the alleged historic Temple Mount have called on supporters to widely take part in the intensive break-ins to al-Aqsa Mosque over the next two days, to celebrate the Jewish holiday of Purim.

The extremist groups have pointed out that this storming is important to them and to their followers, noting that during which they will celebrate the Purim by performing Talmudic Rituals and sharing sweets.

Al Ray notes that al-Aqsa Mosque is exposed, on a daily basis, to such activities, at which the settlers perform Talmudic rituals and desecrate the sanctity of the mosque, under guard of Israeli forces.

Israel seeks, through these actions, to divide the temporal and spatial division of the mosque, and to further Judaize the occupied city of Jerusalem.

The number of Israeli settlers storming the holy site has risen since  US president Donald Trump’s declaration of occupied Jerusalem as the capital of Israel. Members of the so-called “Temple Mount” movement are publicly calling its followers to participate in wide scale mass raids on the holy site.