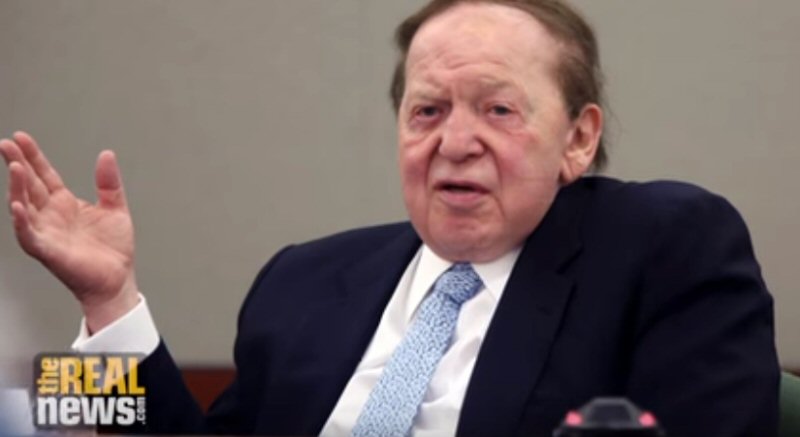 Billionaire Sheldon Adelson’s offer to pay for moving the U.S. embassy in Israel to Jerusalem represents the privatization of U.S. foreign policy, says Phyllis Bennis of the Institute for Policy Studies.

Phyllis Bennis is a Fellow and the Director of the New Internationalism Project at the Institute for Policy Studies in Washington D.C. She is the author of Understanding the Palestinian-Israeli Conflict: A Primer, Before and After: US Foreign Policy and the September 11 Crisis, Ending the US War in Afghanistan: A Primer and Understanding the US-Iran Crisis: A Primer. Her most recent book is Understanding ISIS and the New Global War on Terror: A Primer.

SHARMINI PERIES: It’s the Real News Network. I’m Sharmini Peries coming to you from Baltimore. Right wing Billionaire, Sheldon Adelson, has offered to pay for a new US embassy in Jerusalem. The Trump administration is planning to open the new building in Jerusalem in May. It is not yet clear whether this is legal for a private donor to fund a US embassy. Lawyers at the State Department are investigating the question. According to the Associated Press, Adelson is a notorious conservative oligarch who has bankrolled Israel’s hardline right wing prime minister, Benjamin Netanyahu, and a right wing pro-Israel groups in the US. And some would say Adelson has also barred some important decisions of the Trump administration.You could see Adelson prominently seated at the Trump inauguration last January. The Trump administration’s decision to move the embassy led to a global outrage. The international community condemned the US at the United Nations for opposing international law.East Jerusalem has been illegally occupied by Israel for several decades now. And according to international law, East Jerusalem was supposed to be the site of an independent future Palestinian state. Trump’s decision to move the US embassy there, calls into question the US government’s commitment to the so called “two state solution” in Israel, Palestine.Joining us now to discuss this is Phyllis Bennis. Phyllis is director of the New Internationalism Project at the Institute for Policy Studies.All right. Phyllis, tell us about why the US is speeding up this move?

PHYLLIS BENNIS: I think the significance is less about the pace, than about how they’re planning to go about it. This is a move that’s now designed to undercut the fear that many have raised about the enormous cost of building a new embassy in Jerusalem. Putting aside political issues, legal issues, financial issues and a whole host of other questions. Just the questions of the cost of it will be somewhere over a billion dollars.And for a president who has claimed to resent the spending of large amounts of money for new embassies overseas, he had to figure out, “How are we going to manage this?” That’s what led to this extraordinary new development, which is the offer from Sheldon Adelson, the Las Vegas casino mogul, as he’s always identified, a great supporter of Trump, great supporter of Netanyahu, the owner of the largest daily newspaper in Israel, who volunteered to essentially buy the embassy.And what that says about the privatization of US foreign policy. Foreign policy in the interest of private interests. In this case, the interests of Jewish and Christian Zionists in the United States, as well as in the interests of the right wing of the Israeli State, is not a surprising thing, but nonetheless a shocking reality to consider, that we would be selling an embassy. A former State Department official, who used to be in charge of things, like arranging to purchase land to build embassies and that sort of thing, said she had never heard of such a thing and wondered, “Does this mean we’ll be obligated to name it after him?” It will be the Sheldon Adelson Memorial Embassy. It’s a shocking reality.

SHARMINI PERIES: And Phyllis, how significant is this? That now the Trump administration is considering having private individuals fund government buildings, and embassies and so forth.

PHYLLIS BENNIS: It’s very significant. It’s significant, certainly, at the symbolic level. What this says about the willingness of the Trump administration, that has no strategic plan for actual foreign policy, to make these reckless policy decisions solely in the interests of wealthy donors and their own constituencies. In this case, Sheldon Adelson, a leading donor to the Republican Party, a leading donor to the right wing in Israel, and an active supporter, a Jewish Zionist, an active supporter of Israeli settlements, Israeli apartheid and the Christian Zionist movement that is very much tied to Adelson interests.This is of course, Sharmini, not the first time that we’ve seen issues of privatization of policy. We can look back a little more than 20 years, where you had an example that was seen at the time as a great gift, as a philanthropic gift. That was when Ted Turner announced, sort of out of the blue, that he was going to donate a billion dollars to the United Nations. This was in 1997. When the United States was in Arrears at the UN, was refusing to pay its dues at the UN.And Ted Turner, who was actually a great supporter of the UN, a supporter of multilateralism, came in and said, “Look, I have a lot of money. I’m going to spend it at the UN. I’m going to give it to the UN to make good on this US debt.”The problem was several fold. There were some particular problems. He didn’t actually give a billion dollars. He gave a hundred million dollars over what turned out to be closer to 15 years than 10. But the real problem wasn’t that he divided it up over the years. The real problem was he didn’t give money to the United Nations. He gave money to a private foundation, that he created, called the UN Foundation, that he ran. He chose the board of directors. And that board made the decisions about which UN agency would get the money. So, any UN agency could apply to the foundation for funding. And this is, remember, at a time when the UN is desperate for funds, whether it was for UNICEF, or UNDP, for all of its various agencies.But now you have this private group of citizens of the, mainly of the United States, a few internationals, hand-picked by Ted Turner, accountable to no one, making the decisions over whether clean water in Chad is more important, or girls education in Bangladesh is more important. You know, why should a bunch of individuals get to make decisions like that, that affect whole populations, that affect the whole world. It was completely disastrous in its impact in terms of seeing somehow the legitimacy of privatizing foreign policy for the whole United Nations.Now, we’re seeing this in a much more blatant way, where it’s clearly designed. There’s no illusions here. This is very openly designed to placate a wealthy right wing Zionist, a wealthy right wing supporter of the most right wing sectors of the Israeli state, the most right wing sectors of the Republican Party. And he wants it, so he gets it. There is, of course, additional problems. The small problems, like international law that recognizes that Jerusalem is occupied territory, small item. A small item, like what it says to the Palestinians. That the new temporary annex, the temporary embassy in Jerusalem before the big one, the Adelson Embassy, is built, will be announced and they will move in, in just a couple of months on when? May 15th of this year, which will be the 70th year since the Nakba, like the Palestinians call, “The Nakba.” The catastrophe that led to the expulsion and dispossession of over 750,000 Palestinians from their land. Land to which they’ve never to this day been allowed to return. That’s the day that the Israelis celebrate as Independence Day and that’s the day that the US will officially open a small, temporary embassy in Jerusalem, which will make all the political points, all the symbolic points before they even begin to deal with is it even legal for Sheldon Adelson to buy himself an embassy?

SHARMINI PERIES: Phyllis, can you speak to the legal basis, or lack thereof, of this move in terms of the US embassy moving to Jerusalem and a private entity paying for this?

PHYLLIS BENNIS: Well, those are two different questions. In terms of US law, there’s no US law that would prohibit a US embassy from being anywhere. There is international law. But as we know, this administration in particular, and earlier administrations as well, have not been too worried about international law. There was a US law passed in 1995, signed by President Clinton, that mandated the move of the embassy to Jerusalem. It was widely understood to be purely symbolic for members of congress who wanted to placate their own pro Israel donors. That’s what it was all about. It was talked about very openly at the time.What happened next was that they all realized that it would be disastrous in terms of actual policy to actually do that. So, they inserted in the law, an exception that says, “Every six months, the President, if she or he decides, can issue a waiver that says national security interests mandate that we not implement this yet. We’re going to put it aside. And every president, every six months since 1995 has done that, until Donald Trump this last time.He issued the waiver, but said, “The waiver this time is only about timing and we’re going to go ahead and do it.” So, there’s no reason that this has to be done in terms of US law. And under international law, of course, it’s illegal altogether.Now there is a law, there’s a regulation in the State Department that has a formal process for accepting gifts. Part of the language of that, and that includes real estate. It includes very rigorous reviews. It’s designed to make sure that, and I quote here, “That the gift would not give the appearance of a conflict of interest.” So, that’s an official regulation. Now, this isn’t an appearance of a conflict of interest. This is a straight up open, acknowledged conflict of interest. So, this stands in complete violation of at least that regulation of the State Department. The problem is, like with international law, State Department regulations are only useful if somebody’s prepared to defend them. Is there anyone in congress who’s prepared to defend it? Is there a lawsuit that can be brought? Whose behalf would it be brought on? These are all questions that remain.Right now we’re looking at a situation where the State Department has not issued a final decision whether or not they believe it to be legal to accept money under these terms, that would essentially be the Sheldon Adelson Embassy. Whether or not it’s officially named for him, it’s understood to be built in his interests with his money. So, what else are we going to call it? We don’t know if the State Department will acknowledge that it’s legal, or claim that it’s legal when it’s clearly not.And then the question will be, if they try to do that, who in congress, who in the judiciary, who else might stand up and say, “This is not legal. Aside from being politically dangerous, morally bankrupt and a whole host of other things. It’s also not legal.”

SHARMINI PERIES: All right. Phyllis. I thank you so much for joining us today, and I look forward to having you back because I think this issue isn’t going away any time soon.

PHYLLIS BENNIS: I look forward to it. Thanks, Sharmini.