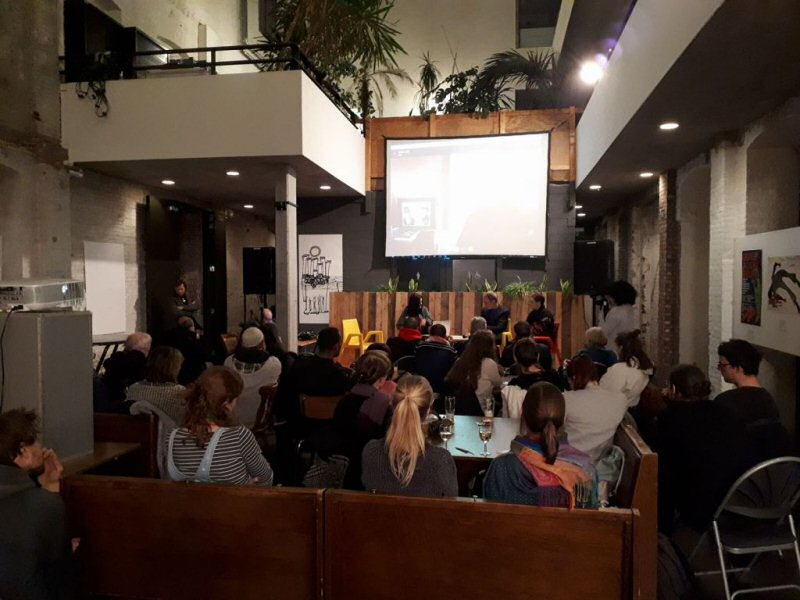 The Eye on Palestine festival in Ghent, Belgium, running from 17 to 23 February 2018, featured a range of films, cultural events and discussions focusing on the struggle of oppressed communities internationally, particularly the Black Liberation movement in the United States and the Palestinian liberation struggle. In particular, the 2018 festival focused on prisoners’ struggles in Palestine, the United States and beyond.

The festival’s framework was inspired by the work of professor Greg Thomas, whose exhibition on “George Jackson in the Sun of Palestine” served as the centerpiece and driving theme of the events of the week. The exhibition, which was mounted in the main hall at De Expeditie in Ghent, includes poster art, letters, book covers and other material that highlight the life and death of Black Panther and prisoner leader George Jackson, assassinated in prison in 1971. Among his books and possessions were Palestinian poems by Palestinian poet and freedom struggler Samih al-Qasem. The exhibition looks at Black-Palestinian solidarity in light of resistance movements, prison organizing, poetry and art. It was first exhibited at the Abu Jihad Museum in Abu Dis and has since been shown in the African Community Center of Jerusalem, San Francisco, Vienna, Washington, DC, and elsewhere.

Among the festival’s events was a discussion on 21 February, which featured a presentation by Rasmea Odeh, former Palestinian prisoner, torture survivor, resister to U.S. oppression and deportation and Palestinian community leader. Odeh discussed her experiences in Israeli and U.S. prisons, the use of solitary confinement and the various forms of torture used in an attempt to suppress resistance. She urged young people in particular to take their role in the struggle for liberation everywhere, highlighting the connections between struggles for justice and liberation in Palestine, the United States and throughout Europe.

Odeh was joined by Black Panther veteran and former U.S.-held political prisoner Dhoruba Bin Wahad – who has previously been denied entry to Palestine for his political activity – who spoke via Skype at the event. Bin Wahad explored his own prison experience, highlighting the resistance role of prisoners’ self-directed reading and education in defiance of the prison authorities. He also noted the ongoing role of Israeli arms corporations and U.S. imperialism in neocolonialism in Africa and around the world. In this context, he denounced the criminalization and repression of Palestine activism and international solidarity in the U.S. and internationally.

Charlotte Kates, international coordinator of Samidoun Palestinian Prisoner Solidarity Network, also joined the panel discussion, which was coordinated by long-time Belgian antiracist and prison abolition organizer Luk Vervaet. Kates presented facts and figures about the situation of Palestinian prisoners today, highlighting the cases of Ahed Tamimi and her fellow child prisoners as well as the boycott of Israeli occupation military courts currently being conducted by over 450 Palestinians held without charge or trial under administrative detention. She noted the ongoing imprisonment of Lebanese struggler for Palestine Georges Ibrahim Abdallah in French prisons as part of the Palestinian prisoners’ struggle, as well as the importance of international joint struggle and collective organizing to fight imperialism, Zionism, racism and oppression in all forms.

The festival included a week of events that focused on the struggles of oppressed peoples against imprisonment and colonialism. Greg Thomas presented a keynote address for the week, reflecting on the struggles of Black people in the United States and Palestinians and the role of imprisonment as a means of oppression and punishment by racist systems.

Rasmea Odeh later spoke at a special event in Brussels at the community coffee shop and organizing center Le Space on Saturday evening, 24 February. Her next event in Europe will take place on 27 February in Amsterdam, organized by Anakbayan and Revolutionaire Eenheid; the program and Rasmea Odeh herself have come under attack by Zionist, racist and far-right forces and require support and solidarity.