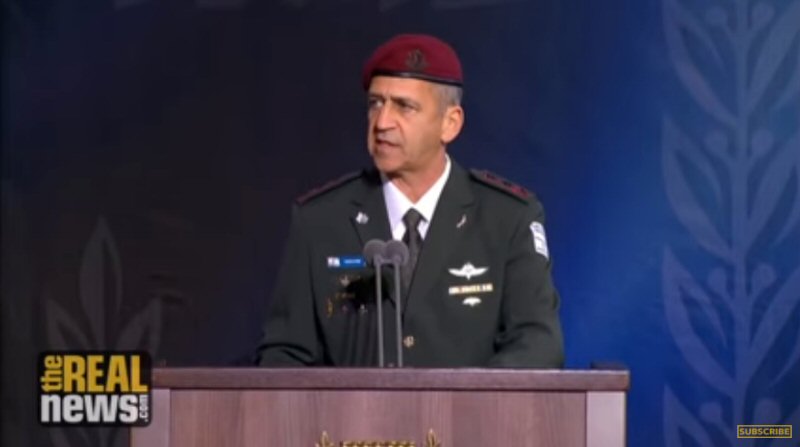 Professor Eyal Weizman studied the philosophy that guides Aviv Kochavi, the officer who was just appointed commander of the Israeli military. It is a philosophy that objectifies Palestinians and ignores the human suffering caused by new Israeli technologies and tactics of repression.

MARC STEINER: Welcome to The Real News Network. I’m Marc Steiner. Great to have you with us.

Here’s a question: Can philosophy be turned into a deadly weapon? Well, the new commander in chief of the Israeli army, Aviv Kochavi, thinks so. The previous Israeli Minister of Defense, Avigdor Lieberman, resigned in November to protest the ceasefire between Israel and Hamas, but still found time to install his favorite candidate to take over as chief of staff of the IDF, the Israeli Defense Forces. Benjamin Netanyahu, who has been serving as the acting minister of defense, as well as being prime minister, of course approved his nomination.

The man appointed, as we said, is Lieutenant General Aviv Kochavi. People know him popularly as the first vegetarian head of the Israeli Defense Forces. But that’s not what’s important. The significance runs much deeper than that. Here is a speech he gave upon being appointed.

AVIV KOCHAVI: Now, in my turn, as I have undertaken the responsibility to lead the army, I vow to to dedicate all of my efforts for a critical and demanding approach, to strengthen the protective wall and to adapt it to the challenges of the present and of the future. In focus: increasing the capacity to hit the enemy, and standing a deadlier, more efficient and innovative army, which remains true to its purpose and to its uniqueness.

MARC STEINER: Kochavi is known for his study of French philosophers Gilles Deleuze and Felix Guattari. He applied their innovative concept of space to lead Israeli troops in 2002 to the walls of homes in Balata refugee camp and Nablus, avoiding possible ambushes but ruining the lives of thousands of Palestinian families–something we will explore this conversation with our guest.

And our guest is Professor Eyal Weizman, who teaches spatial and visual cultures at Goldsmiths, University of London. He’s the founding director of the Center for Research Architecture and the director of research agency Forensic Architecture. His recent book is Forensic Architecture: Violence at the Threshold of Detectability, which was published in 2017 by Zone Books. And Eyal, welcome. Good to have you with us.

EYAL WEIZMAN: Good to be here.

MARC STEINER: Let’s start with this relationship, strange relationship, you have with Aviv Kochavi, who apparently sued you because of the work you were writing. Talk–tell us a bit about that background between the two of you, and how that came about, and what happened.

EYAL WEIZMAN: So, back in 2006 I published an English version of an article that exposed the existence of something like an architectural school or a theory special school for Israeli soldiers and officers, who were then at that time dealing with a relatively new field of military affair, and that is urban warfare. The military understood that in order to manage the complexities of urban warfare, the exist of many civilians, of media, the complex terrain, physically; the complex media sphere around urban warfare. They needed tools to understand action in complex environments. And that school was referred to the time as the Operational Theory Research Institute. Educated many officers reading what we were consider left-wing theories coming from urban studies and sociology, and indeed, also, art theory and philosophy like the theories of Gilles Deleuze and Guattari, mainly in the book A Thousand Plateaus.

And that work, in various of those terms, were introduced in developing various military forms of maneuver. For example, Gilles Deleuze and Felix Guattari introduced the concept of the rhizome, rhizometric movement or manoeuvre, by which multiple independent or semi-independent actors work in perfect coordination within a swarm through space, in which the military units are not contiguous and tightly held, but operating in a sort of wide diffusal. And that led to a very famous battle in those terms that was on the attack on the refugee camp of Ballata by Nablus, in which these theories were actually manifested. One of the leader of, the commander of the paratrooper brigade that undertook that maneuver was the same man who is now the Israeli chief of staff.

And what they have developed is a way in which a wide multiplicity of small groups would enter the refugee camp from different directions simultaneously, navigating through the build fabrics more like worms are making their way through an apple. In three dimensions, cutting walls full of holes, and through ceilings and floors, and move within it.

When I have written about it, in English there was no–there was very positive response from the academic community. But the problem began when we wanted to translate that article into Hebrew. And at that moment the–one of the staple, one of the most important left-wing journal, theory journal in Israel, theory criticism, accepted it for publication. But sent this essay to the Israeli army for a response, something that I consider to be completely unacceptable. Instead of a response they have received a threat of legal action on behalf of Kohavi, the current Israeli chief of staff, for threat to withdraw that article from publication.

What they complained about was several factual things to do with numbers of casualties. Of course, I stand by my sources.

MARC STEINER: So what was at the heart, though, of why they–why would they go after an academic article? What was it at the heart of it, in short, about why they went after you? But then they also backed off and dropped it at the end, correct?

EYAL WEIZMAN: Yeah. At the end they backed off because the, I think many in the Israeli left-wing academic community understood that this is an unacceptable move. First, it was unacceptable by the journal, by Theory and Criticism, to send it to the military, and then for the military to exercise any kind of pressure. They have their own means to do it. There is military censorship. There’s all sorts of means that they have to try to silence critique in an intellectual academic debate.

As critical as it may be, and I’m extremely critical of the Israeli military human rights record and behavior in general in relation to the Israeli occupation, or colonization, of the West Bank and Gaza. They were trying to shut down this thing because it was, I think, inconvenient for them for these facts to be released. It was considered as embarrassing for them that these theories and these sources actually be used for military purposes.

MARC STEINER: So last year over 250 Palestinians were killed in Gaza by Israeli troops. Most of them are unarmed protesters. They were shot with sniper fire. And Palestinians have no army. The Israeli Army has enough ammunition to kill as many Palestinians as it wants. So what does Aviv Kochavi mean that he vows to make the Israeli military deadlier? How much deadlier can they be? And is there an implied criticism there of the former head of the military?

EYAL WEIZMAN: There is continuous debate, political debate, within the Israeli right and extreme right about who can show to the Israeli electorate, to the Israeli public, that they’re tougher with the Palestinians, as if Israel is not been tough enough. As if there is no peace because Israel shows any weakness. I mean, this is obviously ridiculous. But this is a commodity that can circulate very well within the Israeli electorate. You see here now the alternative, the big alternative to Netanyahu. Another former chief of staff, Gantz, has yesterday made a speech. And in fact, his entire campaign he’s running, how many Arabs, or many terrorists he claimed to have killed. This is in the hundreds or thousands. I don’t have the exact number here. But that, the fact that this is a currency in the Israeli public domain is extremely disturbing. That, you know, that even the left or the alternative from the left to Benjamin Netanyahu needs to make inroads here to the public by claiming to be deadly is absolutely frustrating for us in the left and anticolonial movement in Israel.

MARC STEINER: So I’m very curious, as we close this out together, in your book Hollow Land, you kind of show that there were two factions inside the Israeli senior command, which you call kind of the more philosophical officers like Shimon Naveh and others versus more simply–the simple, straight ahead officers like Moshe Ya’alon. In recent years we’ve seen the latter becoming much more dominant in the Israeli army, calling for application of brute force rather than sophisticated colonial domination. So what do you think is at foot here. Does the appointment of Kochavi portend something really different? I mean, where does he really stand on all this? What does it all really mean, and how deep is that divide?

EYAL WEIZMAN: You see, that’s the structural problem of the Israeli occupation of the West Bank. They want to control that space without being there in the heart of the Palestinian areas. They need to develop forms of surveillance, forms of attack, and forms of maneuver that allow them to go in and out very fast so that they can claim there is no occupation. We are not in Bethlehem. We are not in–in Hebron, yes. But we’re not in the other major Palestinian cities, like Nablus. Whereas effectively they exercise complete control over the lives of all Palestinian citizens between the river and the sea, whether it is through the population register, whether it is through surveillance, whether it is through their ability to strike and kill, in fact, anyone that they want to.

So the idea is how to make the occupation invisible, how to develop new forms of control, of manoeuvre. And if you need to, to enlist the new technologies and new critical theories, all the best, in order to kind of, to live with that paradox. We need to go on–they want to go on dominating the Palestinians. But they want to go out to say to the world we are, in fact, outside the population center. There is no occupation. There is some kind of situation that needs to be resolved.

MARC STEINER: This’ll be really interesting to watch how this unfolds, and I can’t help but think, just knowing a lot about him and who he is, what this could portend for the future in terms of the military and their tactics, and what’s going to happen with the Israelis and Palestinians. Eyal Weizman, it’s been a pleasure to have you with us. I appreciate your work. Appreciate your taking the time today with The Real News. I look forward to talking to you again as soon as we can.

EYAL WEIZMAN: Thank you very much.

MARC STEINER: I’m Marc Steiner here for The Real News Network. Thank you all so much for being with us. Take care.