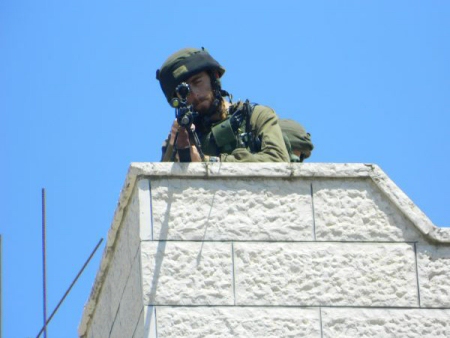 On Tuesday morning, at 8:30, we received a call from Badee Dwaik, one of the co-ordinators of Human Rights Defenders, a Palestinian human rights group, about the unfolding situation in Al Fawwar refugee camp.

Around 2:00 that morning, hundreds of Israeli soldiers invaded the village. Claiming they were looking for weapons, they went from home to home, searching each one. In homes that they searched, the soldiers destroyed furniture and made a mess. Their invasion caused clashes, as young Palestinian men and boys rushed out to confront them with rocks.

As we drove close to the village, we could see a roadblock and a number of Israeli army jeeps stationed and blocking the passage of vehicles in and out of the area. We saw a UN car and spoke to the drivers. They too were denied entry.

X, my fellow activist, and myself, decided to try getting into the village. The soldiers at the roadblock stopped us and asked us who we were. Knowing that the UN were denied entry and that in greatest likelihood if they were denied entry then our group would face the same treatment, we told the soldiers we are tourists. One of them looked at us and asked “OK, but are you sure you want to go in? It’s not very quiet there”. We feigned ignorance and asked the soldier what is going on. He said he couldn’t tell us, but advised us not to go in.

We said that we would like to go in anyway. I resisted the urge to tell the soldier that the reason things were “not very quiet” in the village was because he and his comrades were attacking it.

As we entered into the village, we ran into a group of soldiers from Hebron. We knew each other well from previous encounters, especially settler tours and their forays into H1. They were very hostile and tried to stop us from filming, by blocking and attempting to grab my camera. They snapped at Palestinians to get into their homes or to keep moving. We could hear gunshots and sound bombs exploding in further areas of the village.

Pretty soon, we saw some Palestinian men throwing rocks at soldiers. The soldiers opened fire on them with rubber coated steel bullets, we could hear the loud “bang” noises as we sat behind a wall and observed.

A Palestinian family invited us to their house, and we observed from the rooftop as Israeli soldiers entered people’s houses. Groups about a dozen armed soldiers would enter through the door. Of course the families were not consulted. We visited a home that just about 15 minutes before was searched by the soldiers. We came to room after room of upturned furniture, clothes strewn over the floor, beds and tables flipped over. We witnessed a group of soldiers come into a home of a Palestinian family, a big dog with them.

Sometimes the houses were searched, but not always. During other times the soldiers went on the rooftops and made themselves comfortable. They were using these people’s homes- with the families still inside- as impromptu military vantage points. Had there been any real fighting- ie the people being victimized actually having weapons and being able to shoot back- these families would have been in great danger. Deliberately endangering civilians is a war crime.

We witnessed a group of Israeli soldiers throwing both acousitc and gas grenades at school-aged Palestinian children who were throwing stones at them. They pointed their guns at these kids, as well as at us, in an attempt to intimidate. The soldiers swore at the Palestinian family who allowed us to stand on their roof and observe, yelling “sharmuta” (whore) at them.

Later, we witnessed clashes in another part of the village between older Palestinian youth and men, and the Israeli army, along with with a special unit of border police forces who were shooting off round after round of rubber-coated steel bullets and live ammo. There were three International Committee of the Red Crescent (ICRC) ambulances standing by, and, very unfortunately, they were kept busy throughout the whole day. By the time the “operation” was over, forty Palestinians were wounded and one seventeen-year-old boy was dead –shot in the heart with a live bullet. Some people later told us that the soldiers were stopping and detaining these vehicles as they rushed to take the wounded away… if so, it would be another war crime.

Being witnesses to the cruelty and brutality of the soldiers, we also were witnesses to the kindness of the people whom we met in the village. The Palestinian man who with his family allowed us to observe from their roof knew he was taking a big risk, since the military could target him next.

As the siege was progressing and one could hear gunshots and the explosions of sound grenades in the village, the first family we stayed with not only offered us cup after cup of coffee and tea, but later a delicious Palestinian breakfast. Their kids asked again and again to have their pictures taken.

As we walked through some parts of the village when it was safer to do so, people guided us to the places where the soldiers were engaged in their “action”. The second family we visited- whose furniture was trashed by the soldiers- also offered us drinks and warmly welcomed us.

How they were able to maintain their hospitality and kindness in the midst of this horrific event is beyond me. I really have no idea how I would have responded in their place if I had guests come at a time like this. Tragically, such raids happen there on more or less a regular basis. As traumatic as this particular attack was, it was nothing new.

After about six hours there, we had to leave. We could hear the sound bombs and gunshots continuing on our way out. We made sure to hide our memory cards prior to exiting, but the soldiers manning the checkpoint did not even check.

The “operation” was very militant, and well planned. The village was surrounded from all sides, with soldiers blocking the road leading into the village, and others being staked out in the hills. Small white drones buzzed overhead, taking photos. No one was able to get in (although, after about a few hours, the UN was allowed passage) and everyone was carefully screened on the way out.

The army and border police, I later learned, pulled out the next morning, after spending about 24 hours in the village.

The Israeli military had tremendous success — forty wounded and one dead on the Palestinian side, and, on the Israeli side, one lightly wounded soldier who was hit by a rock.

A truly resounding military victory — except that the targets were not uniformed members of an enemy army, or even armed militants. The targets were civilians. Refugees. People already living a life that is economically difficult, who were now hit (again) by this type of calamity.

What happened three days ago was a criminal action — state ordered, supported and sanctioned, and even armed, by certain powerful governments.

However, it was a crime nevertheless. Hopefully, one day, justice will come to this land, and events like this will be remembered as history of a tragic past, not the current and ongoing reality of today. 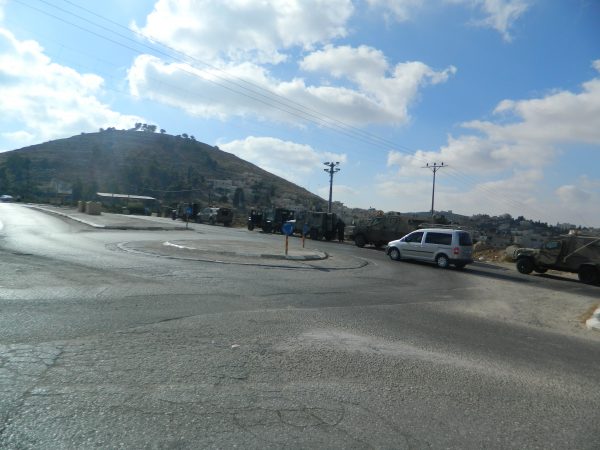 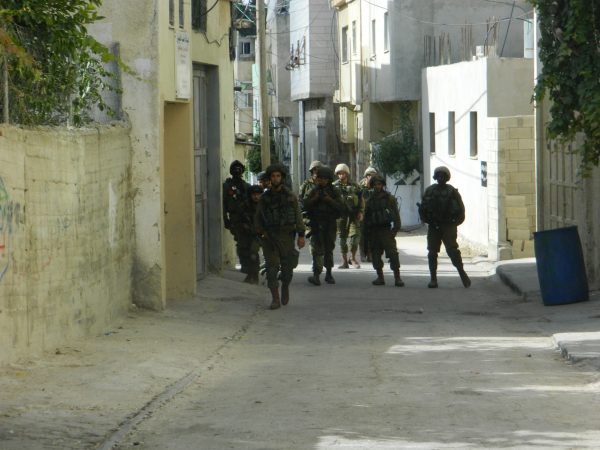 A group of Israeli soldier in the camp.

Palestinians watch from a rooftop as Israeli soldiers enter another Palestinian home.