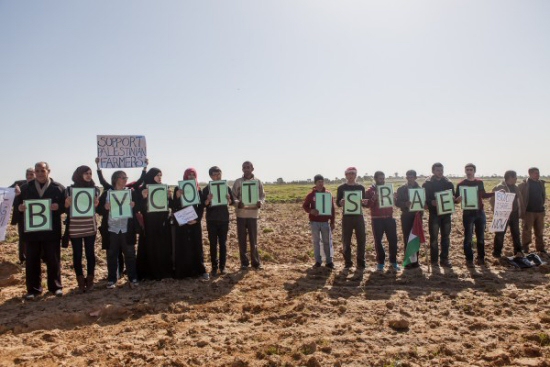 The International Solidarity Movement is a Palestinian-led movement with a mandate to support Palestinian nonviolent popular resistance to Israeli military occupation and apartheid.

Palestinian-led nonviolent resistance includes the Palestinian call for Boycott, Divestment and Sanctions of Israel, until it adheres to its obligations under international law.

(Photo by Desde Palestina: Palestinian and international activists hold signs in support of the Boycott, Divestment and Sanctions (BDS) movement by the buffer zone in Zeitoun on 9 February 2013.)

“We find that our presence sometimes results in reducing the level of lethal force used by the Israeli military against unarmed Palestinians. Further isolation of Palestinians by denying access and/or deporting human rights activists aims to make Palestinian communities already vulnerable and suffering from abuse even more vulnerable.

As a civilian population living under military occupation, Palestinians in the occupied territories are promised protection under international law. All parties signed to the fourth Geneva Convention have the obligation to insure that others, including Israel, adhere to international law. Civilians are being called on to fill in the gap created by the failure of governments and official international bodies to provide protection and fulfill their obligations.

See the statement by the Boycott National Committee here.