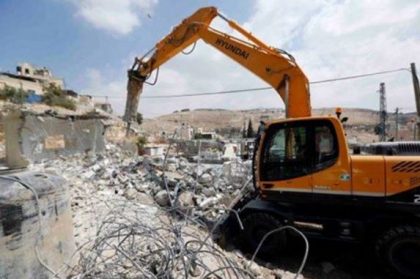 The WAFA Palestinian News & Info Agency said the demolished factory belonging to Waleed Ajaj, and that the army claimed it was built without a construction permit from the Israeli Authorities.

It added that the soldiers confiscated all the equipment and tools in the factory before demolishing it, and also invaded a pottery workshop belonging to Rami Ayyoubi, and searched it.

In related news, the Palestinian Prisoners Society (PPS) has reported that three Palestinians, who were recently kidnapped by the army, were repeatedly assaulted by the soldiers, and by the interrogators at an army base in Entael illegal colony and Etzion military base, in the Hebron district, in the southern part of the occupied West Bank.

Also on Thursday morning, the soldiers invaded the West Bank city of Bethlehem, and nearby Beit Fajjar town, broke into and searched a few homes and kidnapped two Palestinians.

On Thursday at dawn, undercover Israeli soldiers infiltrated into the northern West Bank district of Jenin, and kidnapped two Palestinians.