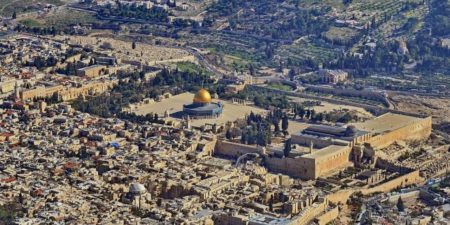 The National Bureau for defending land and resisting settlements stated, in its latest weekly report , that the Israeli Housing Ministry and the Israeli Occupation Municipality in Jerusalem have launched a large settlement scheme aim toward the construction of 11,000 settlement units on Qalandia’s airport lands in order to expand the Attarot settlement, and in an attempt to impose sovereignty on occupied Jerusalem, and to separate it from its Palestinian surroundings, as well. PNN notes that the Qalandia airport has been closed, by Israeli authorities, since the outbreak of the second Intifada, in the year 2000.

During the past few weeks, the Israeli government has started building 176 settlement units in the illegal Nof Zion settlement, located on the slopes of the Mount of Olives, to the south of the occupied Jerusalem. With the completion of these units, Nof Zion will have about 550 housing units (i.e., the largest settlement in the Palestinian neighborhoods of Jerusalem). The above mentioned land was legally disputed, but was finally taken by Israeli businessman Rami Levy, along with Australian Jewish businessman and Skype founder Kevin Bermeister. It was said that the current construction is in its first stage, and the second stage of the project includes 2 plans to build 350 housing units, a hotel, and an air train.

For his part, human rights activist Ra’ed Bashir, from Jerusalem, disclosed the existence of 3 projects in the Masarra neighborhood of occupied Jerusalem, where a fundamental change in its commercial features was implemented by transferring the Square, located opposite of the shops, to a public park. The plan also involves extending the adjacent tunnel until it reaches the Hebron Gate. Thus, the municipality submitted project number 77679-04-101, called the Completion of the Tunnel, which seizes 44 dunams, including the opening of an underground tunnel from Hebron to Masarra, in order to transform the open area into a transportation network station.

The legal office revealed that the occupation municipality is currently preparing a structural plan under number 0465229-101, starting from Sultan Suleiman Street up to the Masrara neighborhood, including several residential and all commercial neighborhoods in the city. The project covers an area of ​​700 dunams and is planned to serve as an alternative to the traditional commercial centers in Arab Jerusalem.

It is noted that the number of settlement units which have been built during the past 10 years has risen to nearly 20,000 units, according to data published by the Israeli Central Bureau of Statistics, whereas a total of 19,634 housing units have been built in the last decade, nearly half of them in isolated settlements. In terms of distribution, the survey showed that 60% of the buildings (i.e., 11,628 units) were built in small settlements containing a population of no more than 10,000. The rest of the units were built in large blocs such as Ariel, near Salfit and consisting of about 1,718 units, and Givat Ze’ev settlement, to the north of Jerusalem, consisting of about 1,283 units, while the settlement of Modi’in Illit contains about 2,310 housing units. Moreover, Israeli Prime Minister Benjamin Netanyahu has pledged to transfer some NIS 40,000,000 as a “gift” to settlers, because they supported him.

On the other hand, Israeli authorities have imposed new restrictions on the entry of Palestinians to their agricultural lands, in areas named by them as a focal-point located between the Apartheid Wall and the “Green Line,” estimated at 140,000 dunams. The Israeli Civil Administration issued permits to allow Palestinians to enter their lands, knowing that Israeli authorities rejected 72% of the permits in 2018, as compared to 24% in 2014.

Meanwhile, during the UNs’ annual celebration of the International Day of Solidarity with the Palestinian People, which correspondences with 29 November of each year, UN Secretary-General Antonio Guterres asserted that the establishment of settlements in the Occupied Palestinian Territories, including East Jerusalem, has no legality. It is a flagrant violation of international law, as stated in UN Security Council Resolution 2334, which calls for a halt to the construction of settlements, an end to the demolition of Palestinian homes, and the suffering of the Palestinian people in Gaza. As for Federica Mogherini, the High Representative of the European Union for Foreign Affairs and Security Policy said, yesterday, that negotiations between Palestinians and Israelis is still possible, warning that Israeli settlements in the occupied West Bank and East Jerusalem constitute an obstacle to peace, contradict international law, and threaten to make a two-state solution impossible.