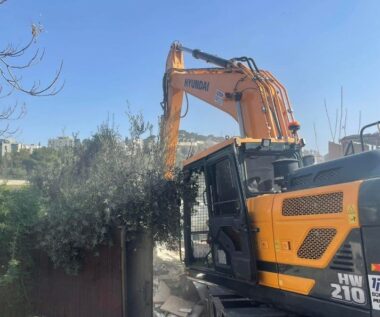 On Saturday, the illegal Israeli occupation authorities forced a Palestinian family to demolish its home in the Wadi Al-Jouz area in the occupied capital, Jerusalem, in the West Bank.

Mustafa Aramin said that, about a year earlier, he and his brother received a demolition order for their two-story home for being built without a permit.

He added that the family filed appeals with Israeli courts to save their property, but their applications were denied.

“Last week, the authorities informed us that we either demolish our property by this coming Sunday or face fines that exceed 90.000 shekels,” Mustafa stated, “We had no other option but to demolish our property to avoid the extra fines and fees we would face, and now nine family members are homeless.”

The Palestinian Central Bureau of Statistics said that, in the year 2022, the Israeli occupation demolished 1058 buildings, including 353 homes and 705 various types of structures, including 93 incidents where the Palestinians were forced to demolish their homes, including 88 in Jerusalem.

It added that %29 of the demolition was in Jerusalem, including 128 homes and 176 various types of structures.

The Israeli home demolition policy is a flagrant violation of the Fourth Geneva Convention of 1949 for the Protection of civilian persons in times of war and article 17 of the Universal Declaration of Human Rights, issued in 1948.