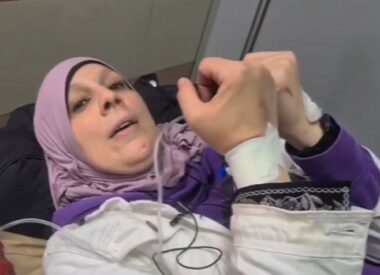 Media sources said the soldiers attacked Samaher Ismael Hamed, 45, in a neighborhood in her town, causing fractures and bruises before Palestinian medics rushed her to a hospital in Ramallah.

Eyewitnesses said the soldiers stopped a young man in the town and started assaulting him before the woman intervened.

Samaher said she was driving her car, heading to Ramallah, when she was stopped by the soldiers who parked their military vehicles in the middle of the road.

“A female soldier ordered me to park on the other side of the street, and then I saw the soldiers pushing a young man out of another car and forcing him on the ground,” she added, “They forced me out of the car, and saw my necklace with the picture of Mujahid Hamed, and started asking me about him, and beating me up…” she added, “They were beating me up and struck me with their rifles several times until I fainted, and when I woke up shortly after they were still attacking me…”.

“They tried to handcuff me, and I tried to stop them before another soldier came running and kicked me in the kidney area and chest… now the doctors are running tests and want to do an X-ray because they believe I have rib fracture..”

It is worth mentioning that Mojahed Mahmoud Hamed, 32, was killed by Israeli soldiers on December 7th, 2022, in Deir Dibwan town, east of Ramallah.