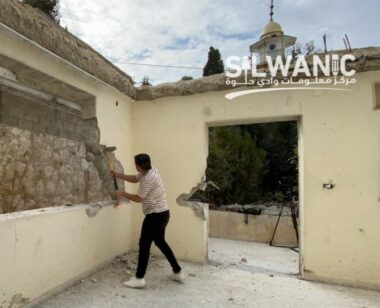 The Israeli authorities in occupied Jerusalem forced, on Saturday evening, a Palestinian from the Wadi al-Jouz area, in the city, to demolish his home.

Hamza Bazbazat said that the City Council forced him to demolish several rooms and walls in his property, rendering it unsafe.

Bazbazat added that in the year 2005, the family was forced to pay a 100.000 Shekels fine and received the final demolition order in late 2019 before it demolished the ceiling and was ordered to remove the entire property.

In related news, the soldiers invaded the al-Minya village, southeast of Bethlehem in the West Bank, and handed demolition orders targeting three under-construction homes under the pretext of not receiving a permit from the “Civil Administration Office,” the administrative branch of Israel’s illegal occupation.

The Palestinians were given 96 hours to demolish the properties or face heavy fines and fees, in addition to the demolition costs if the army carries the demolitions out using its equipment.