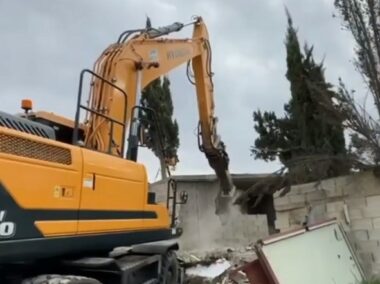 On Friday, the Israeli occupation authorities forced a Palestinian to demolish his home in Beit Hanina town, north of the occupied capital, Jerusalem, in the West Bank.

Harbi Rajabi said the army and personnel of the City Council invaded his home and ransacked it before forcing the family out.

He added that the soldiers forced him to demolish his home for being built without a permit after threatening to impose heavy fines and fees in addition to demolition costs if the City Council used its workers and equipment.

The home was 100 square meters and provided shelter to Rajabi and his family of seven children.

At the same time, Israel continues to build and expand its illegal, segregated colonies in the occupied West Bank, including Jerusalem, in direct violation of International Law, the Fourth Geneva Convention, and various United Nations and Security Council resolutions.

The Israeli Committee Against House Demolitions (ICAHD) has revealed that, in 2022, Israel demolished 928 structures and displaced 953 Palestinians, with a further 28.255 Palestinians affected.

ICAHD added that in 2021, 3004 structures were demolished in the Negev/Naqab – 431 homes and 2553 agriculture and livelihood structures.