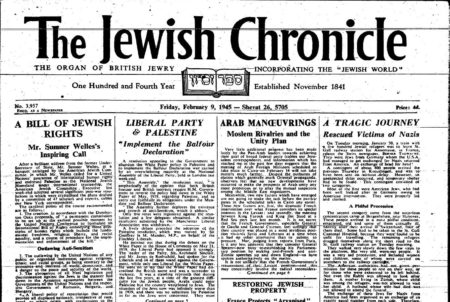 A London-based, pro-Israel newspaper suffered embarrassment this week, as The Jewish Chronicle published a public apology and agreed to pay damages to a pro-Palestine charity, after falsely accusing it of supporting terrorism.

The Palestinian Relief and Development Fund, also known as Interpal, is a British-charity which provides relief and development aid to Palestinian refugees in occupied Palestine, Lebanon and Jordan.

The Israel-supporting paper published the apology on Friday over an article it released in March 2019 titled: “Corbyn spoke at conference calling for release of terrorists.”

“We accept that neither Interpal, nor its Trustees, have ever been involved with or provided support for terrorist activity of any kind. We apologize unreservedly to the Trustees for any distress caused.

“Following the apology, Interpal’s reputation has now been rescued but this story has raised new questions about The Jewish Chronicle, who seem to have form in libelling and defaming British Muslim organisations and pro-Palestine activists. The language used in these articles can create negative consequences for those targeted.”

Another example took place in January 2014, when the paper apologized and paid substantial damages to British relief agency, Human Appeal International, after falsely accusing it of supporting suicide bombings, according to Press TV/Al Ray.

Marc Wadsworth, a life-long anti-racism activist, has also complained to the press regulator IPSO about The Jewish Chronicle’s choice of words in an article published in 2018. The article allegedly used misleading terms to describe an exchange between Wadsworth and pro-Israel Labour MP Ruth Smeeth.

The Chronicle eventually agreed to change the wording of the Wadsworth article, but allegedly refused to allow him a chance to clear his name with a follow up article. So, for affected pro-Palestine activists like Wadsworth, an apology or word change cannot repair all of the damage.