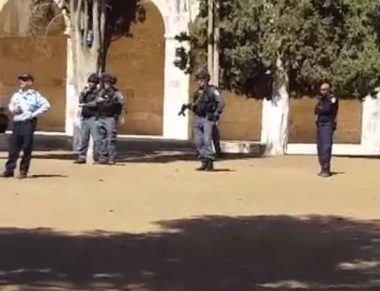 The Jordanian government denounced the escalating Israeli violations against the Al-Aqsa Mosque in occupied Jerusalem, including the Sunday and Monday invasions, and the attacks targeting worshippers and Waqf department employees, in addition to the usage of rubber-coated steel bullets and gas bombs into the mosque courtyards.

Jordan Government Spokesperson, Dr. Mohammad Al Momani, issued a statement calling for an immediate cessation of all violations, and invasions into the mosque.

On his part, Jordanian deputy Prime Minister, Minister of Foreign Affairs Nasser Judeh said that he and Jordan’s Embassy in Tel Aviv have contacted various Israeli officials, denouncing the Israeli violations and holding Tel Aviv responsible for any further escalation.

Judeh called on the international community to oblige Israel to end its serious escalations of International Law and International Humanitarian Law, and to respect and protect the freedom of worship.