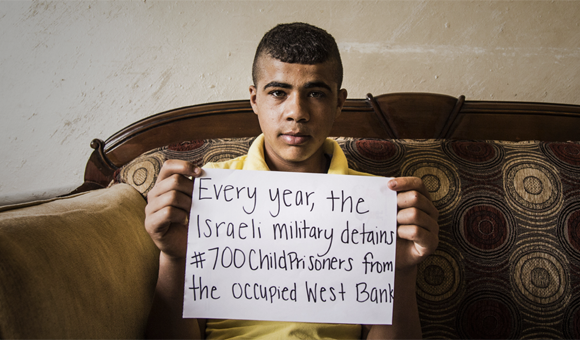 The letter, initiated by Rep. Betty McCollum, D-Minnesota, expresses concern for Palestinian children under 18 years old living “under the constant fear of arrest, detention, and violence at the hands of the Israeli military.” They represent 46 percent of the 4.68 million Palestinians in the West Bank, including East Jerusalem, and the Gaza Strip.

“Representative McCollum and her colleagues recognize that younger Americans increasingly sympathize with Palestinians and responded by calling for justice and equality for Palestinian children,” said Brad Parker, attorney and international advocacy officer at Defense for Children International – Palestine. “By doing so, the lawmakers are challenging the decades-long U.S.-led ‘peace process’ that has consistently demanded peace without justice.”

“It is in the interest of the American people to advance the cause of security, human rights, equality, dignity, justice, and opportunity for Palestinians, just as we do for Israelis,” said McCollum.

Rep. Luis Gutierrez, D-Illinois, Rep. Keith Ellison, D-Minnesota, and Rep. Barbara Lee, D-California, were among the 20 lawmakers that co-signed the letter. They were each selected last month to serve on the Platform Drafting Committee of the Democratic National Committee, which has drawn attention for its uniquely progressive membership, including outspoken supporters of Palestinian rights.

The lawmakers raised “profound concern” regarding the Israeli government’s longstanding policy of arresting and prosecuting Palestinian children in the Israeli military detention system.

Israel prosecutes between 500 and 700 children in military courts each year. Amid escalating violence since October 2015, the number of Palestinian children in Israeli prisons, where according to UNICEF ill-treatment of children is widespread, systematic, and institutionalized from the moment of arrest, has spiked dramatically. Over the past six months, Israel has held more than 400 Palestinian children in prison each month, according to Israel Prison Service data. These totals represent the highest numbers in over five years.

The letter cites an April 2016 report from DCIP that found three out of four children endure physical violence following arrest. The letter states that “such blatant abuses are unacceptable and contrary to U.S. interests and values.”

The U.S. State Department in April released its annual human rights reports, including on Israel and the Occupied Palestinian Territory, where it also found widespread abuse of Palestinian children’s rights in the Israeli military court system.

The Obama administration has greatly expanded the use of special envoys as a means of highlighting and addressing specific foreign policy issues. There are currently 24 special envoys on issues ranging from Climate Change to the Human Rights of LGBT Persons to Israel-Palestine Negotiations.