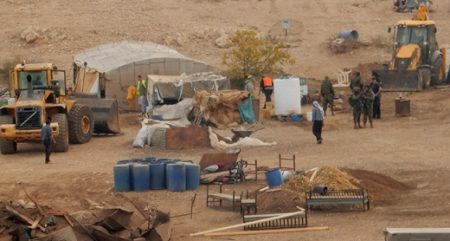 Israeli authorities ordered Palestinian residents of Ras al-Ahmar locality, in the northern Jordan Valley, not to build power lines in their area, a local official said.

Mu’taz Bsharat, who monitors settlement activities in the area, told WAFA correspondence that Israeli troops served locals with an order to stop the construction of a 600-meter-long power line along the road leading to Ras al-Ahmar.

Residents of the area considered part of Area C, which is under full Israeli military control, are not allowed to build power lines or water pipes to their villages. They say that Israel wants to push them out of their land, to eventually take it over for the construction of Jewish-only settlements.

The Jordan Valley makes up about one third of the total area of the occupied West Bank.