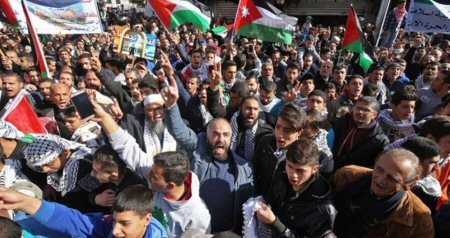 The Islamic Movement, activist youth and other groups staged a protest sit-in, in the vicinity of the US embassy in Amman, this past week, to express their rejection of a visit byJared Kushner, US President Donald Turmp’s senior adviser.

Jordanian security forces closed the square facing the embassy and prevented demonstrators from performing Isha and Taraweeh prayers in the zone.

The participants stood away from the embassy, carrying placards calling on Jordanian leadership not to receive Kushner or participate in the Bahrain economic workshop.

They also chanted slogans against the US, Kushner and Israel, Days of Palestine reports.

Addressing the crowds, secretary-general of the Muslim Brotherhood Abdul-Hamid al-Dunaibat called on the Jordanian government to be clear about its position towards the participation in the Bahrain conference.

Dunaibat called on Kushner to go back to his country, stressing that Jordan is not for sale and will not be a substitute homeland for anyone.

He slammed the rulers of the Gulf countries for scrambling to the arms of Israel and Trump, and allowing the latter to plunder their wealth.