Palestinian Photojournalist at Risk of Deportation 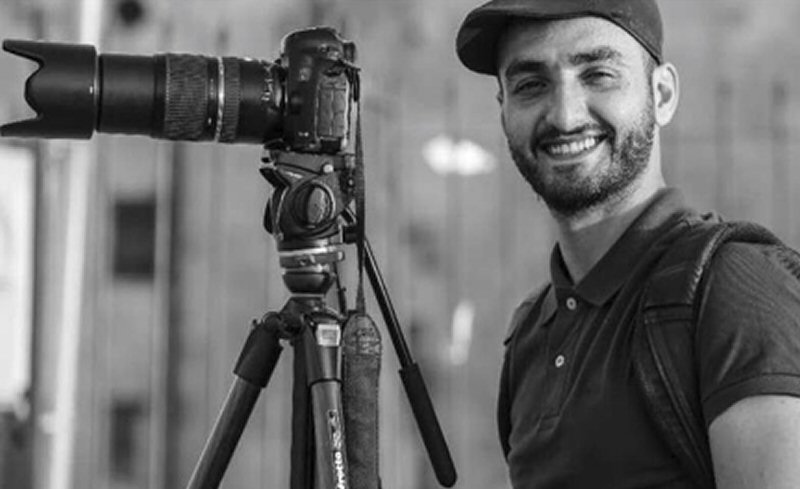 For the past five months, Mustafa al-Kharouf has been languishing inside Israel’s Givon prison, away from his wife Tamam and their one-and-a-half-year-old daughter Asia. But, now, he faces deportation to Jordan.

The 32-year-old photojournalist, son to an Algerian mother and a Palestinian father, has been living in Jerusalem since 1999, when his family returned.

Despite repeated attempts, over the past decade, he has been denied permanent residency status, which he is entitled to, thus rendering him stateless.

By the time Kharouf’s family met the conditions set by the policy, to get residency, Mustafa was 18 years old and his family was not able to submit an application for either reunification or child registration, on his behalf.

In January, Mustafa, who worked with Anadolu Agency, was detained after his lawyer challenged the Israeli interior ministry’s decision to reject his request for legal status.

His fate is now in the hands of an Israeli high court, which will decide if he will be deported to Jordan, a country he has no ties to.

In order to attain their “legal” status as Palestinians in the city, Kharouf’s family applied for family reunification, Al Jazeera/Al Ray further reports.

But, at the core of Israel’s complicated laws for Palestinian residents of Jerusalem  – who are granted residency rights but not Israeli citizenship – is the “center of life” policy, which has been described as a legalized ethnic cleansing.

The policy, which requires Palestinians living in occupied East Jerusalem to prove they keep a center of life in the city, to uphold their legal status, has been criticized by rights groups as discriminatory, and as a precursor to forcible transfers – a serious violation of international law.

Adi Lustigman, Kharouf’s lawyer from the Israeli rights organization HaMoked, told Al Jazeera that Kharouf tried to regulate his status in Jerusalem for years, but to no avail.

“He had an interim order during some periods, but, the rest of the times, he has just managed, like many other stateless and status-less Jerusalemites do,” Lustigman said.

“It is, of course, enormously difficult to be a person with no rights, no work permit, and nowhere to go, in order to be legal.”

From October 2014 to 2015, Kharouf was granted an Israeli B/1 work visa, on a “humanitarian basis”. Yet, requests for a visa extension were eventually rejected by the ministry of interior for “security reasons”.

Lustigman believes that the ministry’s rejections are related to his work as a photojournalist documenting human rights abuses committed by the Israeli authorities, in occupied East Jerusalem.

After Kharouf was married, in 2016, to his wife Tamam, a Palestinian Jerusalemite, he filled out another family reunification application, but it was again rejected in December of 2018, by the interior ministry.

According to Lustigman, the decision was based on unfounded accusations that Kharouf was a member of Hamas, which is banned by Israel.

The lawyer appealed the decision on January 21, 2019, but, the next day, Israeli forces raided Kharouf’s home and abducted him, and he has since been placed under administrative detention – indefinite imprisonment without trial or charge.

“My husband is the most optimistic person I know. But, now, he is beyond miserable,” Kharouf’s wife Tamam told Al Jazeera.

Tamam is permitted to visit her husband once a week, for a maximum of 20 minutes, behind a glass window.

“His spirits have deteriorated so much since his arrest,” the 27-year-old school counselor said. “He has lost 10 kilograms, and is very depressed.”

A few months later, in April, the Israeli District Court rejected Kharouf’s appeal and gave an interim order not to deport him, so he is able to take his case to Israel’s High Court, with May 5 given as the deadline. The appeal has already been filed, but the High Court has yet to make a decision. Kharouf remains at imminent risk of being forcibly deported to Jordan.

Saleh Hijazi, the head of Amnesty International’s Jerusalem office, described the Israeli decision to refuse Kharouf’s residency application and deport him as “cruel and unlawful”.

“[Kharouf] must be released immediately and granted permanent residency in East Jerusalem, so he can resume his normal life with his wife and child,” Hijazi said.

“The arbitrary detention and planned deportation of Mustafa al-Kharouf reflect Israel’s long-term policy to reduce the number of Palestinian residents of East Jerusalem, while denying them their human rights,” he continued.

Following Israel’s illegal annexation of East Jerusalem in 1967, at least 14,600 Palestinians have had their residency permits revoked.

“A person cannot be left stateless”, Jessica Montell, Executive Director of HaMoked, said in an April press release. ” On the practical level, there is no sense holding Mustafa ‘pending deportation’ when there is no country to which Israel can deport him.

“The High Court of Justice has recognized East Jerusalemites as an indigenous population with a unique status. Israel must therefore release Mustafa without delay and give him the legal status to which he is entitled, as a Jerusalemite.”

Tamam has been busy consulting with lawyers, to see what can be done. But, she said that most of them say her husband’s case is too complicated, and refuse to take it on.

“I haven’t thought about an alternative plan for us,” Tamam said. “If Mustafa gets deported to Jordan, he will not receive residency, let alone citizenship.

“In fact he’ll get detained by Jordanian authorities as soon as he crosses the border, for as long as it will take them to review his files and come to a decision on what to do with him,” she continued.

“If he gets deported, it won’t be just one family that will be fragmented. He’ll be ripped away from me and my daughter, from his parents, and from his in-laws.”

Lustigman says that the importance of highlighting Kharouf’s case can make the difference in not uprooting the photojournalist’s life.

“We hope that public opinion, press interests, and NGO actions would have a certain weight and be of help,” the lawyer said.