Justin Trudeau’s Description of BDS: ‘A Pack of Lies’ 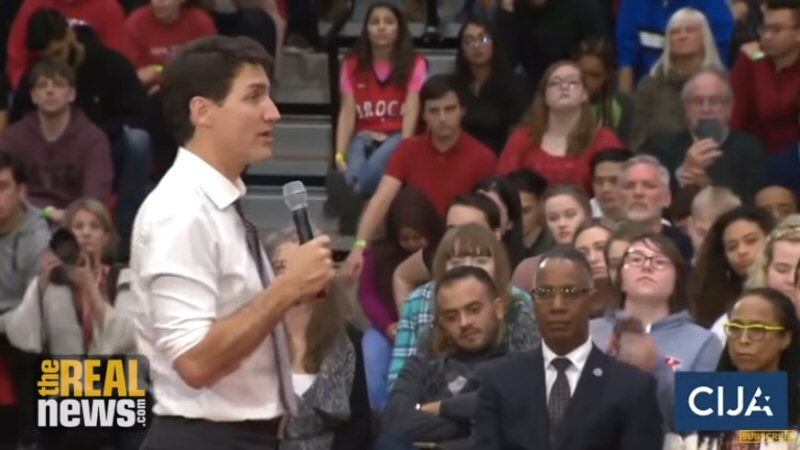 Ali Abunimah, Al-Shabaka Policy Adviser, is the author of One Country: A Bold Proposal to End the Israeli Palestinian Impasse (2006), and co-founder and director of the widely acclaimed publication The Electronic Intifada. His most recent book is The Battle for Justice in Palestine.

GREG WILPERT: It’s The Real News Network and I’m Greg Wilpert, coming to you from Baltimore.

During a town hall meeting on Tuesday, Canada’s Prime Minister Justin Trudeau was given the opportunity to explain his position opposing the Boycott Sanctions and Divestment, or BDS, movement which aims to pressure Israel to end its occupation of Palestinian territories and end their discrimination against Palestinians more generally. He used the opportunity, though, to double down on his position, suggesting that the BDS movement is anti-Semitic. Here’s a clip from his talk.

JUSTIN TRUDEAU: When you have movements like BDS that singles out Israel, that seeks to delegitimize and in some cases demonize, when you have students on campus dealing with things like Israel Apartheid Weeks that makes them fearful of actually attending campus events because of their religion in Canada, we have to recognize that there are things that aren’t acceptable, not because of foreign policy concerns, but because of Canadian values. It’s not right to discriminate or to make someone feel unsafe on campus because of their religion. And unfortunately, the BDS movement is often linked to those kinds of frames.

GREG WILPERT: Trudeau got a lot of attention last November already, when he made similar comments while apologizing for Canada’s role in the Holocaust. Trudeau’s position BDS, though, is part of a larger movement to demonize critics of Israel and Canada, and around the world. Recently, some members of the U.S. Congress, for example, even tried to make BDS illegal in the United States.

Joining me now to discuss Trudeau’s latest statements on BDS is Ali Abunimah. He is an award-winning journalist and the co-founder of the website, The Electronic Intifada. He’s also the author of several books, including The Battle for Justice in Palestine. Thanks for joining us again, Ali.

GREG WILPERT: So first of all, what is your reaction to Trudeau’s explanation for why he’s opposed to BDS, and what is the significance of his position for the BDS movement in Canada?

ALI ABUNIMAH: Well, it’s not an exaggeration to say that what Justin Trudeau said about BDS was a pack of lies. His characterization of the BDS movement was entirely false and entirely in accord with Israeli government talking points, which falsely claim that the BDS movement is anti-Semitic. Justin Trudeau and the Israeli government deliberately conflate Judaism and Israel, which is in itself an anti-Semitic move in my view. And they never talk about the actual goals of the BDS movement. The BDS movement, Boycott Divestment Sanctions, is modeled on the kind of pressure that was brought to bear on apartheid South Africa to help end injustices, racial discrimination and white supremacy in South Africa.

And here we have Palestinians living under an Israeli regime of occupation, settler colonialism and apartheid for decades, with no significant moves by the so-called international community to end their suffering, to end that injustice. So the Boycott Divestment and Sanctions movement is a non-violent, anti-racist movement, a civil society movement led by Palestinians to bring pressure on Israel and companies and institutions that aid and abet Israel’s occupation–which by the way, Canada claims to oppose, they claim to be against the occupation–to bring pressure to make Israel accountable and to respect Palestinian rights.

And Justin Trudeau, instead of talking about Palestinians who can’t go to university because Israel has bombed the universities, because they are caged in the Gaza Strip and not allowed out, because of all of the violence that Israel commits against Palestinian and other people, instead of talking about that, he lies that the BDS movement is about making Jewish students on Canadian campuses feel unsafe. And so, it’s really a cynical, despicable smear, not just against Palestinians and the BDS movement, but against Canadians who support human rights. And I’ll just point out that last year, in the last year or so, there were opinion polls in Canada that showed that Justin Trudeau is out of step with Canadians. Canadians do support Palestinian rights, they do largely support pressure to make Israel accountable, something his government staunchly opposes.

GREG WILPERT: Now, since last November, there have been a number of reactions to Trudeau’s position on BDS when he first expressed them, with op-ed articles and open letters. Now, how has the debate in Canada evolved, and has it had any effect on Trudeau one way or the other?

ALI ABUNIMAH: Well, I’ll note that Trudeau is facing re-election in November, and Canada does have a very strong Israel lobby, a very active Israel lobby, that has been very active in smearing and attacking Canadians, including politicians, journalists and ordinary citizens who stand up for Palestinian rights. And Trudeau is a canny politician, has always played to that Israel lobby, but yet, I think that in Canada, we’ve seen–I’ll point out, two years ago, I think it was in 2016 or ’17, there was an effort to pass an anti-BDS law in Ontario, which failed. In fact, it was the only case I know of an anti-BDS law being voted down in a legislature. There are other examples of laws which never reached a vote because they were killed off in committee, but the Ontario parliament actually voted down an anti-BDS law.

They later passed a toothless resolution condemning BDS, but the actual anti-BDS law was defeated. And I think that’s really one measure that people in Canada understand what’s at stake and that Canadians want to see Canada living up to its very self-serving self-image as this wonderful, liberal human rights loving country. But when it comes to Canada’s support for Israel and Israeli occupation apartheid, really the government of Justin Trudeau has been second to none. You could barely find any differences between the Canadian government’s staunch support for Israel and that of the Trump administration. That’s why I like to call him Justin Trump-deau.

GREG WILPERT: Well actually, that was actually going to be my next question, is that he has this image of being a liberal, but as with many liberals, he seems to be taking a very hawkish position on foreign policy and also in support of Israel. Now, part of the argument, though, is that he’s basically suggesting also, in this town hall meeting, that he’s opposed to the violence and discrimination against Jews that happened in Canadian universities, which he also addressed, actually, even though the BDS movement is supposed to be non-violent, but he won’t say anything about Israel’s violence against Palestinians. I mean, how does that square, and doesn’t that seem like a huge contradiction? I mean, what do you think?

ALI ABUNIMAH: Yeah, of course. I mean, let’s just be crystal clear. The BDS movement, the leadership of that movement, all the well-known activist organizations, have been very clear time and again. This is an anti-racist movement, and of course, it’s a movement while led by Palestinians, includes many Jews. So you have Jewish Voices for Peace in the United States, which is a mass organization that supports BDS, you have Independent Jewish Voice in Canada that supports BDS. And so, what Justin Trudeau is doing, also, is really playing cynical, sectarian politics by claiming that if you’re Jewish, you support Israel, and really silencing and marginalizing and defaming the many Jewish Canadians who support Palestinian rights precisely out of the very Canadian values that Justin Trudeau claims to be protecting by attacking this non-violent movement for human rights.

GREG WILPERT: OK. Well, we’re going to leave it there for now, but I’m sure we’ll come back to you very soon. I was speaking to Ali Abunimah, co-founder of the website The Electronic Intifada. Thanks again, Ali, for having joined us today.

ALI ABUNIMAH: All right. Thank you.