Kerry: “No One Among the Israeli Leaders Wants Peace” 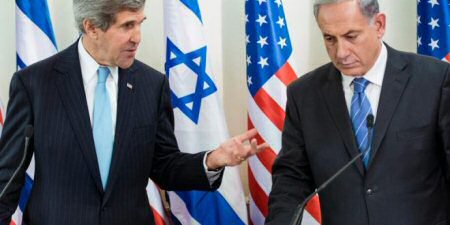 Former US Secretary of State John Kerry and the US administration’s Middle East envoy expressed disappointment at the Israeli occupation leaders’ position on peace, PNN reports.

He said, in a recording published by Channel 10 Hebrew TV: “No one among the Israeli leaders wants peace, That is why his efforts for  the peace negotiations failed.”

Israeli PM Netanyahu’s office immediately replied by saying that” John Kerry did not understand that it is the Palestinians who do not want peace. ”

Kerry said, “Jordan agreed to keep US troops on the border, but Israel rejected all the proposals,”

He added that he “will not be surprised if there is no Palestinian leader, after 10 years, who believes in nonviolence and says ‘I want peace,’ especially because he will tell the generations after him that ‘we tried and tried for 30 years to negotiate with Israel but our efforts failed.’  Palestine will not be immune to human rights movements that will call for equal rights. This result is certain after the failure of the negotiations and the reason for the failure of the negotiations is the absence of any Israeli leader.”

Among the attendees was the head of the joint Arab list, Ayman Odeh, and the leader of the Israeli opposition, Herzog.