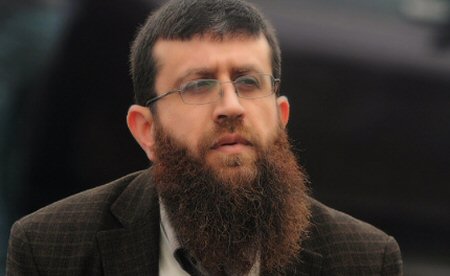 Palestinian prisoner, Khader Adnan, aged 40, is on his 18th day of open-ended hunger strike, in rejection of his arbitrary detention.

Adnan, from Arraba town, in the northern West Bank district of Jenin, has previously went through two major hunger strikes. One was a 66-day long hunger strike, in 2012, and another lasted 55 days, in 2015, in protest of his administrative detention.

However, Adnan is not currently being held in administrative detention, according to Al Ray Palestinian Media Agency.

Israeli occupation forces had detained Adnan on December 11th, 2017 accusing him of incitement.

According to Adnan’s family, Adnan told his lawyer that Israel fakes charges to keep holding him in prison.

Adnan refuses to take the medical tests including weight, pressure, diabetes from the first day of the strike and he just drinks water.