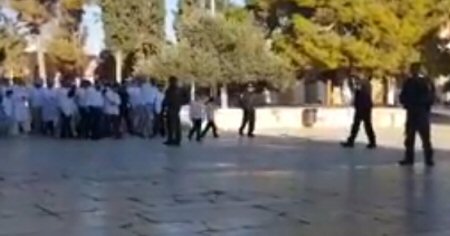 Heavily armed Israeli forces escorted large groups of Israeli settlers as they stormed the Al-Aqsa Mosque compound on Wednesday, for the Jewish holiday of Yom Kippur.

Spokesman of the Islamic Endowment Department (Waqf), Firas al-Dibs, said that, within half an hour, about 40 Israeli settlers stormed the Al-Aqsa Mosque through the Moroccan Gate, under the heavy protection of Israeli forces.

Al-Dibs added, according to Ma’an, that Israeli forces and police escorted the settlers into the compound as they were deployed across the mosque’s premises, prior to the opening of the Moroccan Gate.

Israeli settlers reportedly stormed the compound to perform religious Jewish prayers on the day of the Yom Kippur Jewish holiday, also known as Day of Atonement, one of the most sacred holidays in Judaism.

Al-Dibs mentioned that Israeli forces stood at the entrances of the compound and confiscated ID’s of Muslim worshipers before allowing them entry.

Israeli forces also banned head of the Al-Aqsa Mosque compound’s female guards, Zeinat Abu Sbeih, from entering the compound, serving her with a summons for interrogation at the Israeli police station, in the Old City of Jerusalem, on Thursday morning.

Tensions are high after at least 326 Israeli settlers stormed the Al-Aqsa Mosque on Tuesday, and performed religious Jewish prayers while under the protection of Israeli forces who assaulted several Muslim worshipers and staff members of the Islamic Endowment Department (Waqf), as well as detained several others while in the compound.

According to the Israeli news outlet Israel National News, the Western Wall Heritage Foundation reported that more than one million Israelis have visited the Western Wall, which sits besides the Al-Aqsa Mosque, in the last month.

A statement by the foundation said that “every year the number of (Jewish) worshipers at the Western Wall during the Days of Awe rises.”

In the videos below, Israeli settlers perform religious Jewish prayers in the compound: