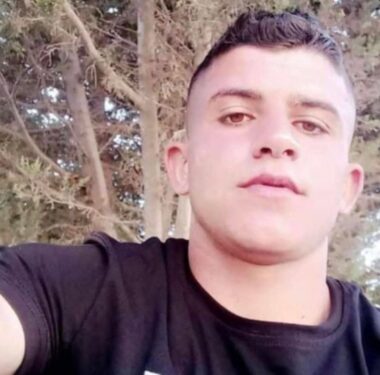 On Thursday night, the Israeli occupation authorities transferred the corpse of a young Palestinian man whom Israeli soldiers killed on December 2nd, 2022, to the Palestinian side.

Update: The soldiers closed the Huwwara military roadblock and prevented the Palestinians from crossing to prevent them from participating in the funeral procession of the slain young man.

The soldiers also intercepted the funeral procession at the Awarta military roadblock while the Palestinians were trying to reach Osarin village, the hometown of Ammar.

Earlier Thursday, the Palestinian General Commission of Civil Affairs said it was conducting constant follow-ups and arrangements to secure the release of the corpse of Ammar Hamdi Mifleh, 19, from Osarin town, south of Nablus, in the northern part of the occupied West Bank.

The funeral of the slain Palestinian will be held Friday in Nablus before his corpse is transported by the mourners, officials, and religious and political leaders to Al-Quds Street before it is transported to his hometown, Osarin, southeast of Nablus.

Ammar was executed by an Israeli soldier who shot him while he was lying on the ground in Huwwara town, south of Nablus. After shooting Ammar on the ground once, the soldier then fired a total of four times again.