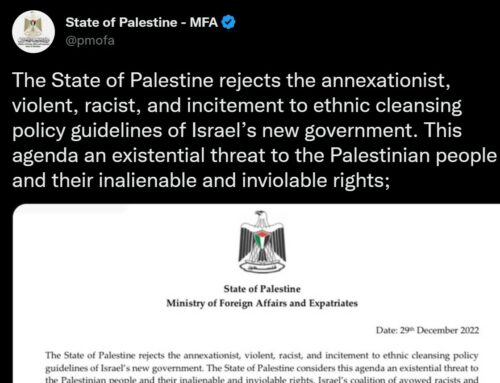 The Palestinian Ministry of Foreign Affairs and Expatriates issued the following statement after the formation of the fanatic, the extreme right-wing Israeli government headed by Benjamin Netanyahu, who is also facing corruption charges.

The State of Palestine Rejects the annexationist, violent, racist, and incitement to ethnic cleansing policy guidelines of Israel’s new government.

The State of Palestine considers this agenda an existential threat to the Palestinian people and their inalienable and inviolable rights.

Israel’s coalition of avowed racists and rejectionists are openly and unapologetically adopting an agenda of colonial expansion, racial discrimination, and apartheid and demonstrating their complete disdain towards the international community, international law, United Nations resolutions, and the international consensus for peace.

In light of the Israeli government’s audaciously clear and objectionable agenda, the international community must carry out its responsibilities and reject any dealings with a government committed to carrying out international crimes, including annexation, political persecution, and racial discrimination.

States must not give credence or legitimacy to this government’s deplorable platform, which embodies the antithesis of the values and political principles of the international law-based order and principles of self-determination, territorial integrity, sovereignty, and political independence.

International peace and security are under attack, requiring quick and unequivocal international mobilization at the bilateral and multilateral levels, including the Security Council.

The international community must immediately ensure the Palestinian people’s protection from Israel’s ongoing campaign of dispossession and displacement, colonization and annexation, ethnic cleansing, and persecution.

States that have long used their political clout to shield Israel from any accountability and ensure its exceptional treatment as a state above the law must also cease this irresponsible policy of direct and indirect complicity in Israeli crimes.

The attainment of our inalienable human rights, including our legitimate right to exist and live in our homeland, is non-negotiable. The realization of these rights is also a binding obligation on all states. Any derogation from these obligations is simply inexcusable. 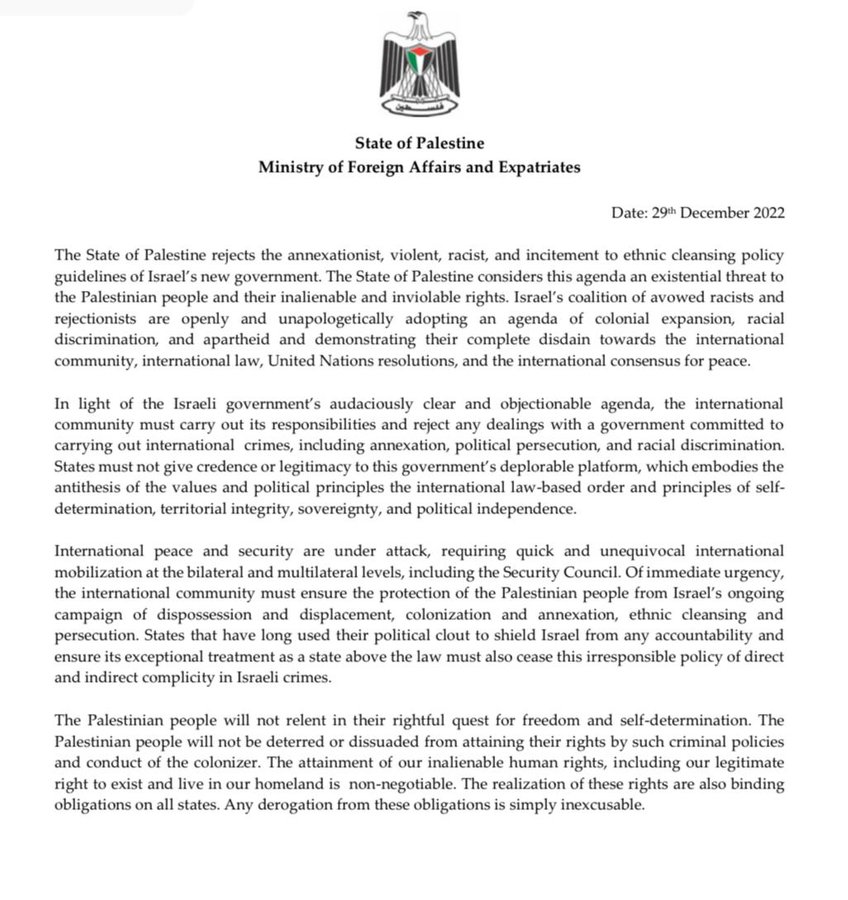