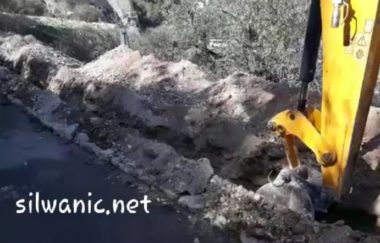 The Israeli Knesset approved, Monday, the construction of residential units for colonialist settlers, in Silwan town, south of the Al-Aqsa Mosque, in occupied East Jerusalem, in the area that Israel has termed “The City of David National Park.”

Media sources said 63 Knesset members approved the plan, while 41 others voted against it.

The constructions are in Silwan Palestinian town, which is subject to ongoing illegal annexation of its lands, homes and property, in addition to frequent demolition of homes.

The “City Of David” colonialist project is part of the larger plan which include the Old City of Jerusalem, and various Palestinian areas near its walls, where more than 100.000 indigenous Palestinians reside.

Israel initially claimed that the “City Of David” project would be a national park and facilities, with no residential components, but is now approving housing units of the illegal colonialist settlers.

It is worth mentioning that Elad colonialist organization, which instigated this bill, has been pushing for the construction and expansion of colonies in occupied Jerusalem, especially in the heart of Palestinian neighborhoods and towns.

This is happening while the Palestinians are denied the basic rights to build and expand their homes on their own lands in occupied Jerusalem, and amidst ongoing demolition of their homes and property.

On Tuesday, Israeli bulldozers dug and uprooted lands in Wadi ar-Rababa neighborhood in Silwan, and started preparing for terraced trenches, as part of the ongoing illegal colonialist activities.