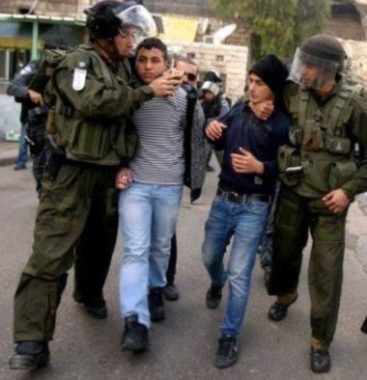 Israeli soldiers abducted, on Tuesday at dawn, eight Palestinians from their homes, mainly in the al-‚ÄôIsawiya town, in occupied East Jerusalem.

The Wadi Hilweh Information Center in Silwan (Silwanic) has reported that the soldiers invaded and ransacked many homes, and abducted eight Palestinians, including five from the al-Isawiya town.

It added that the soldiers stormed and ransacked many homes in al-‚ÄėIsawiya, in the center of Jerusalem, and abducted Waseem Eyad Dari, 16, Saleh Bader Abu Assab, 18, Mohammad Mer‚Äôey Dirbas, 18, Hussein Jamjoum, 20, and Mahmoud Sa‚Äôadi Rajabi.

Furthermore, the soldiers invaded homes in Silwan town, south of the Al-Aqsa Mosque in Jerusalem, before abducting Abada Siyam, and his brother Abdullah.

The army also abducted a young man, identified as Bassem Zayed, from his home in Qalandia refugee camp, north of Jerusalem.