Knesset Committee Strips Prisoners of Right to Meet with MKs 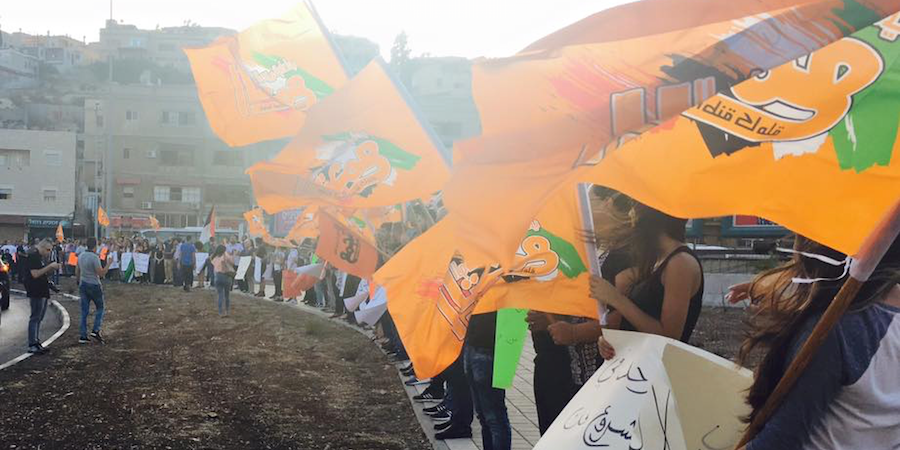 Special session of the Knesset to vote Thursday over whether to strip Basel Ghattas of parliamentary immunity.

Member of Knesset (MK) Basel Ghattas, a member of the National Democratic Assembly (NDA), is under the watch of Israeli police for allegedly smuggling cell phones to Palestinian “security prisoners.”

Police confronted Ghattas on Sunday outside of Keziot prison in the Negev, which he had just visited. Israeli officials claim they found 12 cellphones in possession of Palestinian political prisoners there who “have been in touch with Ghattas.” He was questioned on Tuesday, for so-called security breaches.

Ghattas said that the investigation is evidence of the political persecution of his party:

“It is clear the police are determined to continue the political persecution of the members and leaders of [NDA] and this entire conduct testifies to the policy of political revenge that does not frighten us and will not frighten us in the future either…  Visits to prisoners by Arab Knesset members are conducted in coordination with the Prisons Service and with the approval of the Public Security Ministry. I have nothing to hide, I will continue to represent the Arab public through legitimate political activity.”

MK Haneen Zoabi called the investigation “the persecution of our political action as representatives of our people.” She added that Israel’s treatment of Palestinian political prisoners is “a slow death” and a cause that MKs of the NDA are committed to raising as a matter of moral duty.

Israeli Prime Minister Benjamin Netanyahu said of the suspicions, “whoever harms national security must be severely punished and cannot be allowed to serve in the Knesset.”

Defense Minister Avigdor Lieberman pledged to, “continue to act not just so [the Joint List] will not be a part of the Israeli parliament, but also so they will not be citizens of Israel.” The NDA secured three seats in the Knesset in the 2015 elections as a part of the Joint List party, which has 13 seats total.

The only Palestinian political prisoner that Israeli media has named as allegedly having received a cellphone from Ghattas is Walid Daka, who is classified as a “security prisoner.” He has been in prison for over 20 years for belonging to a “terror cell” responsible for the death of an Israeli soldier.

Israel dubs Palestinian political prisoners “security prisoners” for committing a wide variety of offences. The classification comes with many restrictions, including on furloughs, family visits, conjugal visits, and telephone calls.

“Daka was convicted of taking part in the abduction and murder of the soldier Moshe Tamam. If Daka were a Jew who had murdered an Arab, he would have been released long ago; the same if he were a Jew who murdered a Jew. If he were a Palestinian from the territories, he would have been released in a prisoner exchange deal by now. But Daka is an Arab from Israel, and no one cares about him or his punishment.”

On Wednesday, the Knesset House Committee responded to the allegations against Ghattas by restricting the rights of prisoners like Daka: all MKs are now banned from visiting “security prisoners,” though the committee said a few will be issued “exceptions” to do so.

Though the Knesset House Committee also ruled to revoke Ghattas’ parlimentary immunity, the Knesset Plenum must still decide on the matter on Thursday. NDA party members will not attend the hearing. They protest it as a “field tribunal” with a predetermined outcome.

In the coming weeks, the Knesset may also move to officially remove Ghattas from Knesset, thanks to the new Expulsion Law, which allows the parliamentary body to oust publically-elected members by a majority vote.

“There is no doubt that this law is intended to expel Arab Knesset members who ‘dare’ to stray beyond the boundaries dictated to them by the Israeli Jewish majority, thus silencing the voice of the Palestinian Arab public,” Adalah said of the law when it passed in July.

The Israeli government is also investigating the NDA for fraud, money laundering, violations or campaign financing, and other crimes. The “investigations” have at times led to the mass arrest of party members.

NDA seeks to “transform the state of Israel into a democracy for all its citizens, irrespective of national or ethnic identity.”