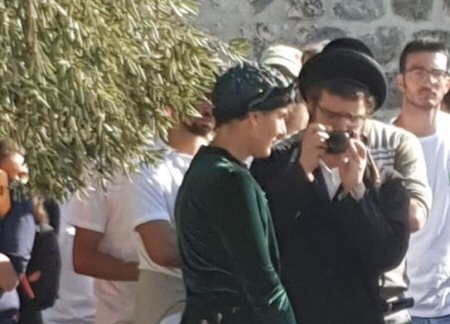 Head of the Public Relations and Media Department at the Islamic Endowment, Firas al-Dibs, said that MK Mualem stormed the Al-Aqsa Mosque compound along with dozens of Israeli settlers through the Moroccan Gate.

Al-Dibs added that Mualem and the Israeli settlers toured the holy site’s premises in a provocative fashion.

Mualem had previously entered the compound in September.

In July, Israeli Prime Minister Benjamin Netanyahu decided to lift the ban that would previously bar Israeli Knesset members from visiting the mosque once every three months, after incursions were banned since October 2015.

Netanyahu allowed members of the Knesset, mostly right-wing extremists who support the demolition of the Islamic site in order to build a Jewish temple instead, to visit the holy site once every three months.

Netanyahu pointed out that his decision was taken due to the recommendations of the Minister of Homeland Security, Gilad Erdan, and the General Commissioner of Israeli Police, Roni al-Sheikh, and the Jerusalem District Police Chief, Yoram Halevy, to once again allow Knesset members the possibility of limited visits to the Al-Aqsa Mosque.

After Netanyahu lifted the ban, Palestinian Authority spokesman, Youssef al-Mahmoud, spoke out about the decision to lift the ban calling it a “serious provocation” and “encouraging harm to one of Islams holiest sites.”

Meanwhile, Ma;an further reports that Israeli police forces also obstructed renovation works on the road leading to the Golden Gate in the compound.

Al-Dibs said that the Renovation Committee crews conducted renovation works to the tiles of the road leading to the Golden Gate due to parts of it breaking apart.