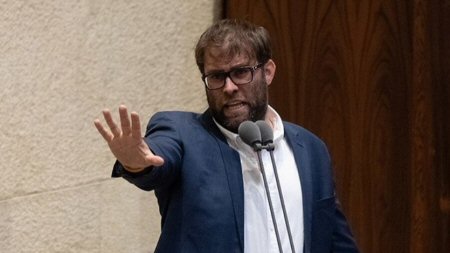 Israeli MK Oren Hazan, from the ruling Likud party, described his handicapped lawmaker Ilan Gilon, from Meretz, “half a human”, during an official plenum.

The comment came during a stormy Knesset debate over legislation that would see government funding for the arts as contingent on “loyalty.” The law targets Arab residents in order to stop commemorating Palestinian occasions.

Gilon had been criticizing Israeli Culture Minister Miri Regev, also of the Likud party, from the podium when Hazan came to her defense.

The disabled MK and Hazan then exchanged words before the Likud backbencher said: “If you weren’t half a human, I would respond to you.”

Gilon replied branding Hazan “the Golem of Prague.” Gilon, who had polio as a child, has difficulty walking unaided and often uses a wheelchair.

“Let me remind you that this repulsive MK also mocked my friend Karin Elharar for her disability. How disgusting can you be?” Zionist Union MK Mickey Rosenthal said.

“If he isn’t thrown out of the Likud in the coming hour — then this is the true face of the party. This is the way they want to lead Israel. Revolting,” wrote Zionist Union MK Stav Shaffir on Twitter.

However, he remained in the Likud.