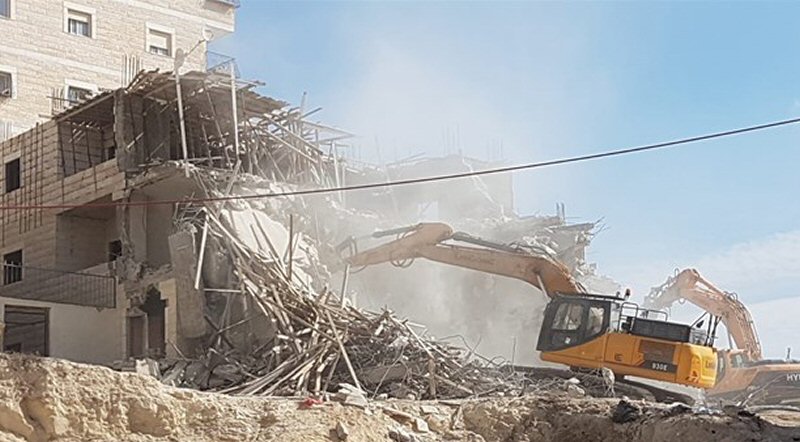 Israeli forces continued with systematic crimes, in the occupied Palestinian territory (oPt), for the week of 01 – 07 November, 2018.

Israeli forces continued to use excessive force against unarmed civilians and peaceful protestors in the Gaza Strip. A civilian succumbed to wounds he sustained during his participation in the Return and Breaking Siege protests. 77 civilians, including 12 children, a woman, a journalist and 3 paramedics, were wounded; 4 of them sustained serious wounds.

In the Gaza Strip, the Israeli forces killed ‘Emad Shahin (17) from al-Nussairat refugee camo when the Israeli soldiers stationed along the border fence between the Gaza Strip and Israeli, east of al-Maghazi in the central Gaza Strip opened fire at 3 Palestinian children and youngsters who approached the border fence.  As a result, one of them was wounded, arrested and then taken by a helicopter to Soroka Hospital.  On 14 November 2018, the Israeli media declared his death after succumbing to his wounds.

On 07 November 2018, the medical sources at al-Ahli Hospital in Hebron declared the death of Ahmed al-Najjar (21) from Khan Younis after he succumbed to wounds he sustained during his participation in the Return Protests, east of Khuza’ah, east of the City.  The above-mentioned civilian was wounded on 26 October 2018 with a bullet that penetrated his abdomen and exited his back during his participation in the Return protests near the Return encampment in eastern Khuza’ah.  At that time, he was referred to the Gaza European hospital where his condition was described as serious and after few days he was referred to al-Ahli Hospital in Hebron until his death was declared.

In the same context, on 02 November 2018, the medical sources declared the death of Mohammed al-Rifi (13) from al-Nafaq Street in Gaza City after he succumbed to wounds he sustained in the 2014 offensive on the Gaza Strip.

As part of using excessive forces against the peaceful protests along the Gaza Strip borders, the Israeli forces during the reporting period wounded 77 civilians, including 12 children, a woman, a journalist and 3 paramedics.  Four of those wounded sustained serious injuries.

As part of targeting the Palestinian fishermen in the sea, the Israeli forces continued to escalate their attacks against the Palestinian fishermen, indicating the on-going Israeli policy to target their livelihoods.  During the reporting period, PCHR documented 3 attacks against the fishermen in the north-western Beit Lahia in the northern Gaza Strip.  However, no casualties or damage to the boat was reported.

In the West Bank, during the reporting period, the Israeli forces wounded 12 Palestinian civilians, including 3 children and a woman, in separate shooting incidents.

As part of the Israeli house demolitions and notices, on 06 November 2018, the Israeli forces demolished 2 residential houses belonging to the family of Kamel al-Rajabi and his sons in al-Aqshqariyah neighbourhood in Beit Hanina, north of occupied East Jerusalem under the pretext of building without a license.  The 130-square-meter houses were built 4 months ago and sheltered 3 families of 12 members, including 5 children.

On the same day, the Israeli municipal bulldozers demolished a commercial facility in Beer Ayoub neighbourhood in Silwan village, south of occupied East Jerusalem’s Old City, udner the pretext of unlicensed construction.  The facility belonged to Mohamed ‘Odah and was built a year and a half ago on an area of 20 square meters.  The facility is a canteen for selling sandwiches and drinks and supported 3 families.

On 07 November 2018, Israeli municipal bulldozers demolished a residential building in Sho’afat refugee camp, north of East Jerusalem’s Old City, belonging to Mahmoud al-Jaradat under the pretext of the unlicensed construction and its closeness to the annexation wall.  The building was comprised of 4 floors; 3 of which were residential and a ground floor that was used as a car parking.  The building was 600 square meters and included 12 residential apartments; 8 were ready for inhabitation.

As part of demolition of houses and other civil objects, on 05 November 2018, the Israeli forces demolished, uprooted and confiscated 3 barracks and 5 tents belonging to ‘Omer Bshara in Kherbet Bzeiq in the Jordan Valleys, east of Tubas on 05 November 2018.  Two of these barracks and tents were residential while one of them was used for sheltering sheep.  The Israeli forces confiscated tin plates and the tents and later withdrew.

As part of the Israeli settlers’ attacks against the Palestinians civilians and their property, PCHR’s fieldworkers documented 4 attacks by settlers, including 2 in Hebron and 2 in Nablus.  As a result of those attacks, 7 civilians, including a baby girl, were wounded.

Child Succumbed to Wounds He Sustained in the 2014 Israeli Offensive on the Gaza Strip:

In the Thirty-second week of the March of Return and Breaking Siege activities, Israeli forces wounded 77 civilians, including 12 children, a  child, a woman, a journalist and 3 paramedics. Doctors classified 4 civilian’s injuries as serious. The incidents were as follows:

The wounded journalist was identified as Ahmed ‘Isam Sobhi Shaqurah (25), a journalist at Palestine Company for Media Production from Sheikh Redawn neighborhood in Gaza City, was hit with a rubber bullet to the head.

Mohammed ‘Abdel Jawad Ghaith (29) said to a PCHR’s fieldworker that:

“At approximately 18:30 on Friday, 02 November 20198, I was home and the area witnessed crowds of settlers swarming into the Ibrahimi Mosque Yard to celebrate “Sarah Shabbat”.  I then heard voices near the gates established at the fence that is around 10 meters away from my house.  I went outside to see 10 settlers aged between 18-40 years attacking my brother, Ibrahim (38) and beating him to the ground while one of them was trying to close the gate with his feet.  I ran towards him to find the settlers had torn his clothes.  I attempted to back them off and quarreled with.  One of the settlers then stepped few meters back, pulled the trigger and pointed his gun at me.  The settlers then started withdrawing while 7 Israeli border officers stepped towards me.  One of the officers held my right hand and strongly bent my fingers backwards until he fractured my wrist.  I felt so much pain and dizzy and then fainted.  I woke up then near Ghaith Family Divan around 15 meters away… I was then taken to Hebron Governmental Hsopital to find 4 of the neighborhood residents wounded by the settlers.  Those wounded were identified as Hamadah al-Fakhouri (30) whose head was bleeding; his brother Hazem (31) whose left hand was swollen; ‘Abdel Jawad Shafiq Ghaith (18) whose right shoulder was wounded; and ‘Alaa’ al-Rajabi (20) who was pepper-sprayed.”

“Around 13:00, we were home and my sister Madin who is married and her child were visiting us.  We heard noise in the vicinity of the house and on the roof, so my father went to see what was going on.  He started screaming outside, so the rest members of my family and I headed to see what was going on.  A number of settlers were on the house roof insulting my father and throwing empty beer bottles at him.  My father was screaming at the settlers and soldiers to force them to leave.  At that time, I saw dozens of Israeli settlers on the road in front of our house.  The settlers started throwing stones at my father wounding him to the arm.  When the settlers left the house roof, one of them threw a big stone at the gate overlooking the house.”